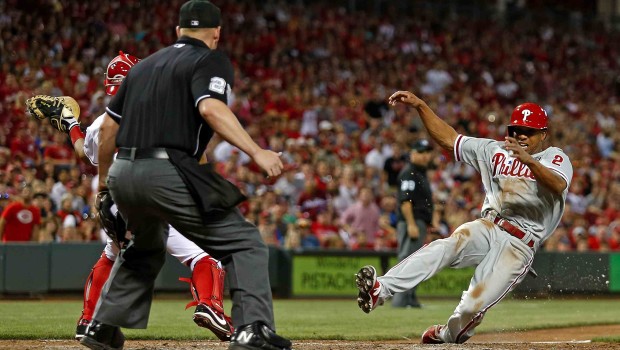 PHILS WIN! HAMELS IS 10-0 AGAINST THE REDS

If only Phils ace Cole Hamels could pitch every game against the Cincinnati Reds.

Hamels pitched into the eighth inning as he stayed unbeaten in his career against Cincinnati, and Jimmy Rollins moved closer to the Phillies’ hit record with a solo homer, leading the Phils to an 8-0 victory Friday night.

The Phillies ended their longest losing streak of the season at six games. Cincinnati dropped its third straight.

Hamels (2-3) improved to 10-0 in 13 career appearances against the Reds, holding them to three runs or less each time. The Phillies have won all of his 13 starts against Cincinnati, including his five-hit shutout during the 2010 playoffs.

Hamels made his big league debut at Great American Ball Park in 2006 with five shutout innings, and he remembers that feeling every time he returns.

“It’s a great memory and it’s everlasting,” said Hamels, who allowed five hits and struck out seven in 7 2-3 innings, throwing 125 pitches. “That’s what I take from it: ‘This is it, this is what I worked for since I was a little kid.’ I take it out there year after year.”

The Phillies piled up 11 hits with eight players getting at least one.

“A lot of guys contributed,” manager Ryne Sandberg said. “That will go a long way going into tomorrow with momentum with a lot of guys.”

Rollins hit his seventh homer off Johnny Cueto (5-5), who lasted only five innings for his shortest start of the season. The solo homer left Rollins six hits shy of the club record. Rollins has 2,228 hits with the Phillies, trailing only Hall of Famer Mike Schmidt’s mark of 2,234.

Domonic Brown had a two-run double and a sacrifice fly, and John Mayberry Jr. singled home a run off Cueto, who matched his season high by giving up six hits. Cueto’s ERA jumped from a league-leading 1.68 to 1.97.

“That’s what good ballclubs do,” Brown said. “They do things like that. They pick each other up. I think we’re growing every day.”

Jonathan Papelbon pitched the ninth to get in some work. His next save will make him the 26th pitcher to reach 300, leaving him tied on the career list with Bruce Sutter and Jason Isringhausen.

The closer for the Red Sox and Phillies was the fastest to his 200th save, getting it in his 359th game. If he gets No. 300 in his next appearance, he will tie Trevor Hoffman (552 games) for second-fastest. Mariano Rivera got No. 300 in his 537th game.

Chase Utley had three hits and a sacrifice fly for the Phillies. He was hit by a pitch and was picked off first base by Cueto, who needed 92 pitches to make it through five innings. Cueto uncharacteristically hit two batters in the same inning and gave up his first homer in five starts.