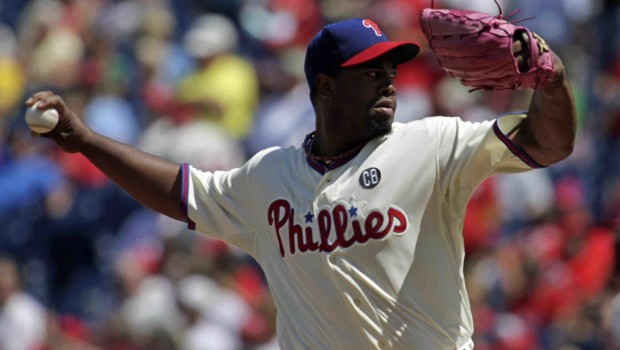 FOR PHILS’ WILLIAMS, HOME IS WHERE THE START IS

Behind a 73/37 strike-to-ball ratio, Jerome Williams threw eight innings of one-run ball. He struck out five and limited the Cardinals to five hits, three walks and a 1-for-9 mark with runners in scoring position as the Phils cruised to a 7-1 win on Sunday.

“Just controlling both sides of the plate. Keeping these guys off balance,” Williams said.

After posting a 6.71 ERA with the Astros and Rangers prior to arriving in Philly, Williams is 2-0 with a 1.77 ERA and 0.98 WHIP in three starts as a Phillie.

After a 12-inning affair that took 4 hours and 53 minutes to complete on Saturday night, being efficient on the mound and going deep into the game was atop Williams’ agenda on Sunday.

“That’s my normal thought process every time I go out there. Just to go as long as I can,” Williams said. “You know, last night was a long one, and I felt like I really needed to help the ballclub. And I needed to throw a pretty good game, go deep in the game. And that’s what I did. That’s what I’m going to keep doing.”

The offense did its part to assure Williams pitched with a lead. The Phillies grabbed a 1-0 advantage in the first on an RBI single by Chase Utley. They tacked on two in the second, when Williams helped his own cause by laying down a perfectly placed safety squeeze bunt, allowing Domonic Brown to score. A Ben Revere bloop single added another run to make it 3-0.

In the third, Philly plated two more after a wild pitch by Justin Masterson let Ryan Howard cross the plate, and a flare to right by Wil Nieves brought home Philadelphia’s fifth run.

The Phillies knocked Masterson out after just three innings and 67 pitches. He allowed five earned runs on six hits and two walks.

The Cardinals broke through for a run against Williams in the fourth that was set up by a bad read on a ball by Revere in center field. Jhonny Peralta hit a cutter from Williams that got plenty of hang time, but Revere didn’t break in initially. The wind carried the ball away from Revere, whose dive came up short as Peralta ended up on second with a double. He came around to score two batters later on a single by Oscar Taveras.

After allowing just one run in seven innings in his last start against the Mariners, Williams credited catcher Carlos Ruiz with helping to make it a seamless outing. On Sunday, Williams pointed to Nieves, who served as his backstop during winter ball in Puerto Rico in the 2008-09 season before catching him again six years later.

“It’s fun to have Wil behind there again, because we both know each other,” Williams said. “I know how he sets up, I know how he calls the game, and now he knows how I pitch. It was fun back there, to throw with him again. It was just like the days in Puerto Rico.”

“I just called the game the way I thought it was good, and he followed it,” Nieves said. “When you have something like that going on, not a lot of shaking off and doubting, games like this happen. It was fun.”

The Phillies cushioned their lead in the seventh, when Jimmy Rollins launched his third homer of the season from the right side of the plate, 16th overall, to make it 7-1.