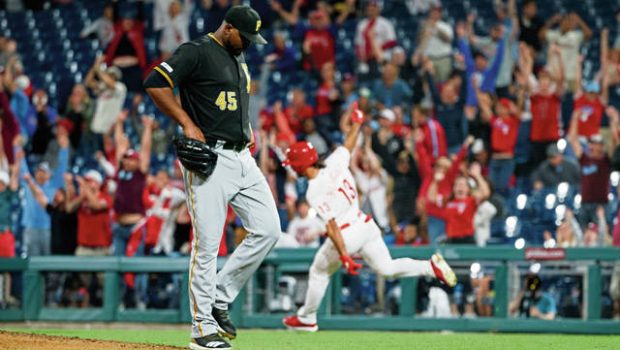 PHILS WILD WIN MOVES THEM TO 1 GAME BEHIND FOR WILD CARD!

And he may have saved his reputation as a major leaguer worthy of keeping around.

He lined a home run leading off the bottom of the 11th inning to give the Phillies a 6-5 victory over the Pirates.

Josh Bell hit a solo homer off Phils closer Hector Neris to tie it at 5 in the ninth after Corey Dickerson delivered a two-run shot against his former team in the eighth to give the Phillies a one-run lead.

But after stranding five runners in the ninth and 10th, the Phillies won it when Rodriguez went deep against Michael Feliz (2-4) for his fourth career walk-off homer. Rodriguez was in a 1-for-21 slump before he connected.

“Think about it. Who is looking bad and feeling entitled when you hear stuff like that?” Rodriguez said about the criticism. “I’m not the one booing. I’m not the one screaming. I’m not the one saying pretty disgusting things at times. That seems pretty entitled. You’re just making yourself look pretty bad as an individual, as a person, as a fan. … There’s still a lot of good fans, though, and those are the ones I hear.”

The Phils moved within a game of the idle Chicago Cubs for the second NL wild card.

Bryce Harper launched a solo homer to right field with two outs in the eighth in his first game back from paternity leave to cut it to 4-3. After J.T. Realmuto’s infield single, Dickerson ripped one out to right to give the Phillies a 5-4 lead.

Dickerson, acquired from the Pirates before the July 31 trade deadline, has 21 RBI in 19 games for the Phillies.

Bell has been slumping and wasn’t in the starting lineup but he crushed a 432-foot homer off Neris for his 33rd this season. Neris has five blown saves in 28 chances this season.

Rhys Hoskins fouled out with the bases loaded and one out in the ninth and heard a chorus of boos as he walked to the dugout. Harper struck out swinging at a 3-2 pitch to send it to extra innings.

“I could care less about that,” Hoskins said of the boos. “We won the game.”

“This one was a must-have,” Vargas said. “Guys came up big. Sean came up big there. We just fought to the end.”

Kevin Newman’s two-run single off reliever Jared Hughes in the seventh gave the Pirates a 4-2 lead.

Brad Miller slammed an opposite-field, two-run shot in the fourth to give the Phillies a 2-0 lead. Miller was only 4 for 27 with two RBI since his last homer on July 16.

The Pirates cut it to 2-1 in the fifth when Adam Frazier ripped a double with two outs and Musgrove smacked an RBI single off the left field wall.