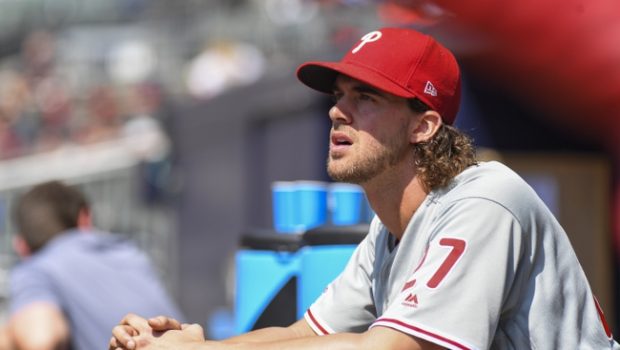 The Phillies lost today at the Braves in Atlanta 5-4, and they are now 3 1/2 games out of the wild card.

Aaron Nola was pitching for the Phils, and, according to MLB.com, they have not won with Nola on the mound since Aug. 20 in Boston. The Phillies have lost each of his last six starts, which ties the second-longest winless streak of Nola’s career. He had a career-high seven-start winless streak from June 11 to July 23, 2016.

Ronald Acuña Jr. blasted an 0-2 fastball on the inside corner for a two-run home run into the second deck in left field in the third inning to give the Braves a 2-0 lead. The Phillies tied the game in the top of the fifth, but Nola allowed two more runs in the bottom of the frame to make it 4-2, with Freddie Freeman hitting a one-out single to right field to score two runs.

Austin Riley hit a solo homer to right in the sixth to make it 5-3.