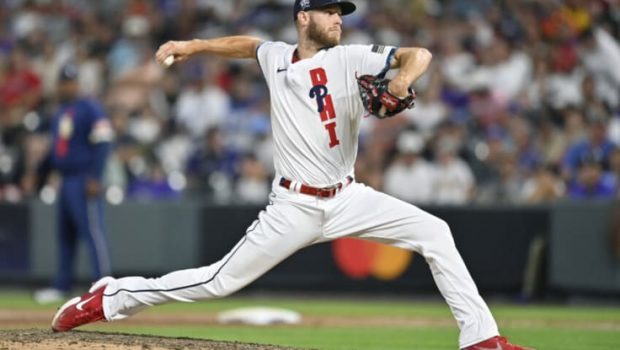 Zack Wheeler has become the ace of the Phils rotation and arguably the second-best pitcher in the NL after the Mets Jacob deGrom:

He’s tied for first in the NL in WAR, second in the NL in strikeouts, and fourth in the NL in ERA, but evidently he didn’t have the cred to get into last night’s All-Star game until there were two outs in the top of the ninth inning.

He fanned Matt Olson with three strikes to close out the side, and Wheeler’s teammate Zach Eflin took to Twitter after the out to vent about the perceived disrespect:

Wheeler is having a career year, but because he’s playing on a middling Phillies team and because he doesn’t have the instant name recognition of a deGrom or the personality of a Max Scherzer, he’s an afterthought in baseball’s summer classic.