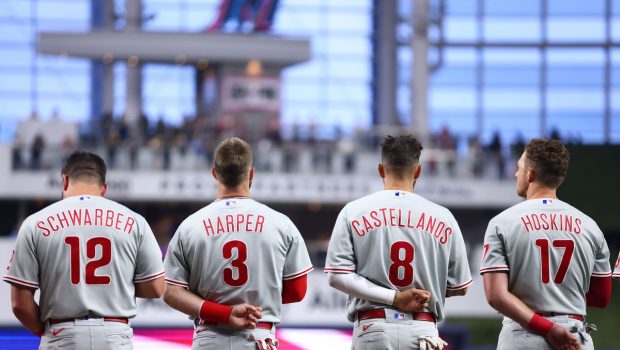 PHILS WASTE NOLA’S QUALITY 5: WHEN WILL THESE GUYS START TO HIT?

And the Phillies are 4-7 after last night’s loss in Colorado.

They are tied with the Nats for last place in NL East.

And their team batting average is only .244, 11th in the National League.

Which is woeful, especially considering Kyle Schwarber and Nick Castellanos were added to bring pop to the lineup.

Kuhl (1-0) allowed a pair of singles, struck out four and walked one, throwing 42 of 68 pitches for strikes.

Aaron Nola (1-2) took a shutout into the sixth before Blackmon led off with his first home run this season.

Nola left after a one-out single by CJ Cron, who came around to score on a groundout and two wild pitches by José Alvarado.

“I thought Alvarado was probably as good as anyone,” Phils manager Joe Girardi said. “He’s tough on lefties. He does get the groundball but unfortunately the wild pitch before that.”

Pinch-hitter Didi Gregorius doubled in a run off Carlos Estévez in the eighth. The Phillies had runners on second and third with one out when J.T. Realmuto lined to reliever Jhoulys Chacín, who doubled up Gregorius at second.

“You tell them not to get doubled up, but it’s bang-bang,” Girardi said. “Your first movement is usually to go, but hope that they can freeze and get back, but he just wasn’t able to.”