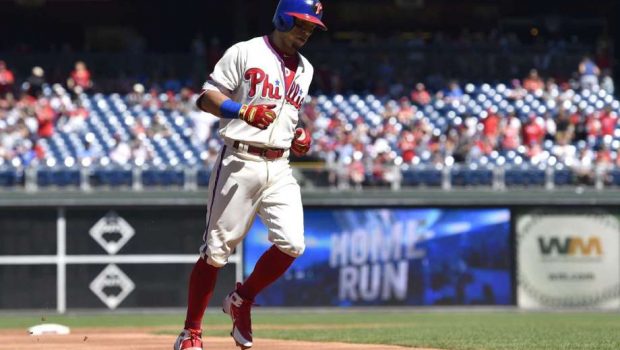 PHILS WASTE CHANCE TO ADVANCE IN RACE WITH 6-4 LOSS TO FISH!

The Phillies blew another chance to get back in the NL pennant race yesterday.

Cesar Hernandez (above) homered on the first pitch from Miami’s Jose Urena, but Peter O’Brien homered and drove in three runs as the Marlins beat the Phils 6-4.

The Phillies remained 6 1/2 games behind division-leading Atlanta, which lost to Washington, with two weeks left.

Nick Pivetta (7-13), who has won only one of his last 11 starts, struck out seven in the first three innings. O’Brien’s two-run homer in the fourth inning put the Marlins ahead for good at 2-1.

“(Pivetta’s) stuff was electric early,” Phillies manager Gabe Kapler said. “I think the only hard-hit ball that comes to mind for me was the home run to O’Brien.

“It looked like he was going to roll and he ran into a little bit of a buzzsaw there.”

Urena (7-12) allowed one run and three hits through a five-inning stint for his third straight win. He left early because of cramping in his pitching hand.

Urena is 4-0 with a 2.16 ERA over his last five starts dating to Aug. 19, when he was pitching under appeal of a six-game suspension he’d incurred for hitting Atlanta rookie with a fastball. He later dropped the appeal, and hasn’t lost since.

The cramping, Urena said, was caused by throwing too many curveballs with a new grip he’s been using.

“I will be fine,” he said later. “It’s gone away. … I threw a couple of curveballs. I kept (the hand) open then because if I squeeze it, it probably gets worse.”

The Marlins scored three times in the sixth against Luis Garcia for a 6-1 lead.

With runners at the corners and no outs, O’Brien hit a long fly to right field and Odubel Herrera — more accustomed to playing in center — had the ball bounce out of his glove before he smacked his head against the fence. The Phillies wound up getting a forceout at second base as a run scored.

Herrera left the game in the seventh.

Down 6-2, the Phils scored twice in the ninth, helped by a two-out error by second baseman Starlin Castro. Rhys Hoskins struck out with a runner on to end it.