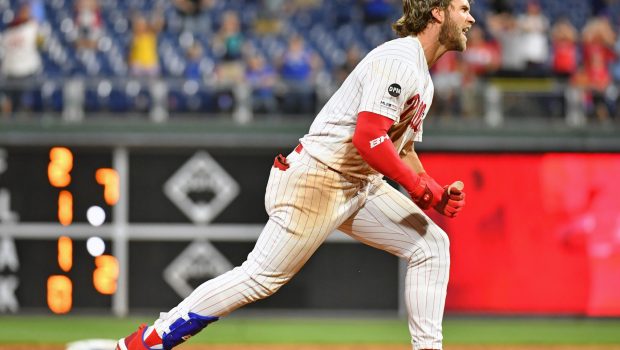 PHILS WALK IT OFF FOR A WIN THAT ENDS HOME STAND AT 3-3!

It may sound like a stretch to say that a game on April 21, 17 days into this season, was a must-win for the Phillies.

But faster than you can say FAILED BULLPEN, they squandered leads of 3-0 and 4-1 but stormed back in the 9th inning to beat the Giants 6-5 and even their home stand at 3-3.

It also evened their season record at 9-9 as they head to Colorado and St. Louis.

Andrew Knapp hit the winning single in the ninth inning, Bryce Harper hit a tying solo homer in the seventh.

Hector Neris struck out two in a scoreless ninth for the win. Mickey Moniak hit his first career home run for the Phillies five years after they made him the No. 1 overall draft pick. Darin Ruf hit a pinch-hit, three-run home run in the seventh off reliever Brandon Kintzler.

With the Giants trailing 4-1 in the seventh inning, Darin Ruf came off the bench and reminded his former team how dangerous of a hitter he can be with a pinch-hit, three-run home run over the center field wall. Ruf’s third home run of the season marked the Giants’ major league-best fifth pinch-hit homer of the year, which is one more than they hit when they led the big leagues with four pinch-hit homers in 2020.

The seventh inning should have ended when Mike Yastrzemski hit a routine flyball to left field, but the ball popped out of Andrew McCutchen’s glove and extended the inning. After the Phillies intentionally walked Evan Longoria, Alex Dickerson hit the first pitch he saw from reliever JoJo Romero into center field to bring home Yastrzemski and give the Giants their first lead of the game.

The Giants were unable to hold the 5-4 lead for long as Harper answered with a two-out solo home run against rookie Camilo Doval to even the score in the bottom of the inning.

Starter Anthony DeSclafani’s dominant start to the season hit a bump in the road at Citizens Bank Park, where the Giants right-hander dealt with rapidly changing weather conditions and a lengthy second inning that required him to throw more than 30 pitches.

The right-hander had allowed just two runs in his first three starts of the season, but gave up a three-run home run to former No. 1 overall draft pick Mickey Moniak in the bottom of the second. Moniak’s first career homer sailed into the left field bleachers and put the Giants in an early hole for the second consecutive game.

DeSclafani wasn’t the only successful Giants pitcher who had a tough day against the Phillies as left-hander Caleb Baragar’s streak of 22 consecutive appearances without allowing a run came to an end in the bottom of the sixth. Baragar picked up a pair of strikeouts to strand Phillies rookie Nick Maton at third base, but allowed his first run of the season when Alex Dickerson misplayed Maton’s one-out line drive into left field that rolled all the way to the wall and allowed Brad Miller to score from first base.