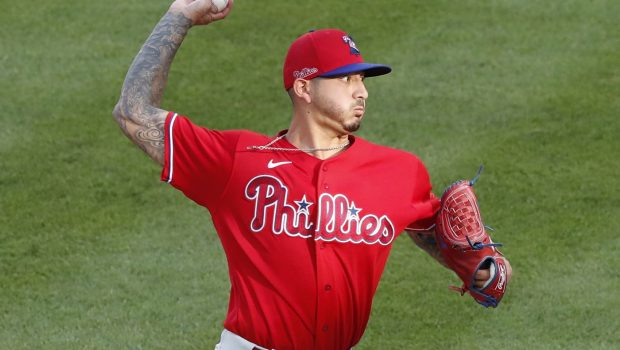 PHILS VINNY IS MOVIN’ ON UP: ‘REALLY IMPRESSIVE IN THIS 2.0’!

But he was bubbly last night about Vince Velasquez:

“Vince has pitched really, really well,” Girardi said following a 2-2 exhibition tie against the Yankees at Yankee Stadium. “We have some decisions to make. But Vinny has been really impressive in this 2.0.”

Velasquez allowed four hits, one run and one walk while striking out six in five-plus innings against the Yankees. He pitched four-plus scoreless innings in an intrasquad scrimmage last week at Citizens Bank Park, allowing two hits and one walk with six strikeouts.

He entered camp competing with Nick Pivetta for the No. 5 job in the rotation. Both could still make the rotation. Right-hander Zack Wheeler is scheduled to pitch Saturday against Miami, but his wife is due to give birth to their first child this weekend. Right-hander Zach Eflin is scheduled to throw a simulated game Thursday. He is behind schedule after missing time because of lower back spasms.

“There just happens to be a lot of moving parts,” Girardi said. “We’re trying to figure out exactly where Eflin is going to be. We have mothers expecting. I can’t really clarify it yet because we’re just not there. A lot of it will depend also on how Zach comes out on Thursday. And then, after that, there are some things we have to work through.”