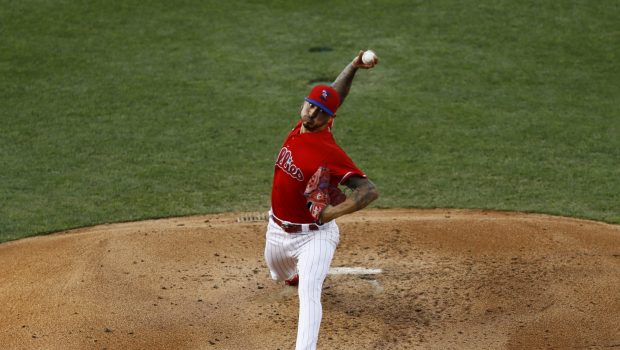 PHILS VINCE VELASQUEZ LOOKS LIKE A SURE THING FOR THE ROTATION!

The Phillies pitching picture is becoming clearer and clearer with each passing workout:

Aaron Nola is the 1, Zack Wheeler the 2 and Jake Arrieta the 3.

He pitched four-plus scoreless innings in a scrimmage Tuesday night, allowing two hits and one walk. He struck out six.

Velasquez entered camp competing with Nick Pivetta for the No. 5 job in the rotation. The Phillies remain high on both Velasquez and Pivetta because both have remarkable stuff.

Has Velasquez taken the lead for the No. 5 job, based on his Summer Camp performances?

“I think it’s been a big pitch for him,” Girardi said. “It’s allowed him to use both sides of the plate. He got better as the game went on. I thought his curveball was good. He looked really good. He’s looked really good his last two outings.”

Wheeler faced 19 batters. The right-hander did not allow a run. He allowed three hits and three walks. He struck out two.

“I thought his stuff was really good tonight,” Girardi said.