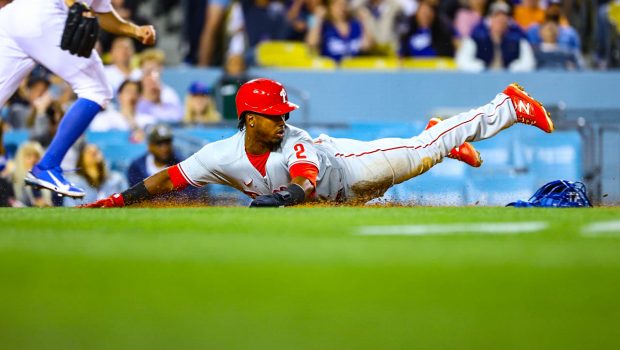 SIXERS POOF, PHILS GET OUR UNDIVIDED ATTENTION TIL SEPTEMBER!

The Phils-Dodgers game didn’t start last night in LA until just after the Sixers season evaporated in game 6 against the Heat.

So, the Sixers are done.

And the Phillies have our attention until the Eagles take the town’s attention in September.

Bryce Harper homered and drove in three runs, and the Phillies pushed two runs across in the ninth inning after squandering a six-run lead and beat the Los Angeles Dodgers 9-7 .

The Phillies saw their 7-1 lead evaporate after the Dodgers used a four-run eighth to tie the game 7-all.

In the ninth, the Phillies scored a run on a wild pitch by reliever Daniel Hudson with the bases loaded. Harper then hit a sacrifice fly to give the Phillies a two-run lead. Hudson (1-3) took the loss.

In the bottom of the ninth, Los Angeles loaded the bases against former Dodgers pitcher Corey Knebel. Austin Barnes flew out to right, Cody Bellinger fouled out to left, and Chris Taylor flew out to center as Knebel earned his seventh save in the wild win.

“I thought we did a great job of battling,” Harper said. “As good teams go through, you’re going to sometimes make mistakes and that happened in this game but we can’t let that happen again. That’s not what good teams do. It’s not what teams who are fighting to win a championship do. I think everybody in here knows that.”

Harper was 2 for 4 with 3 RBI. He hit a solo home run in the first inning, his seventh of the season. Earlier in the day, Harper got confirmation he had a small tear in his right elbow and will need a platelet-rich plasma injection Sunday.

“It was good to know what was going on and put it behind me and focus on the game,” Harper said. “There’s nothing really I can do to help my arm or anything like that. Take that time I need and keep my bat in the lineup.”

The reigning NL MVP can’t throw for four weeks, but he can certainly still hit from the designated hitter spot as he did once again on Thursday.

“I think he’s getting more comfortable there,” Phillies manager Joe Girardi said of Harper in the DH role. “Part of me thinks it might have given him peace to understand exactly what’s going on and what the next step is. I think he’s starting to embrace what he needs to do to help this team win.”

Johan Comargo also homered for the Phillies, a two-run shot in the second inning. Andrew Bellatti (1-0) worked 2/3 of a inning and picked up the win.

“I felt good about the outing. I didn’t really have my legs underneath me,” Wheeler said. “Kind of felt like Jell-O. The results were there for the most part. The last inning kind of got me for two runs. Other than that, felt good with what I had.”

Down 7-3, the Dodgers rallied and tied the game with four runs in the eighth. They loaded the bases against reliever Jose Alvarado. Will Smith drove in a run and Justin Turner hit a pinch-hit double to score two runs, pulling the Dodgers within 7-6. Chris Taylor singled in a run to tie the game at 7. Hanser Alberto bunted into a fielder’s choice as the Phillies threw out Austin Barnes — running for Turner — at the plate, and Freddie Freeman popped out to third to end the inning.