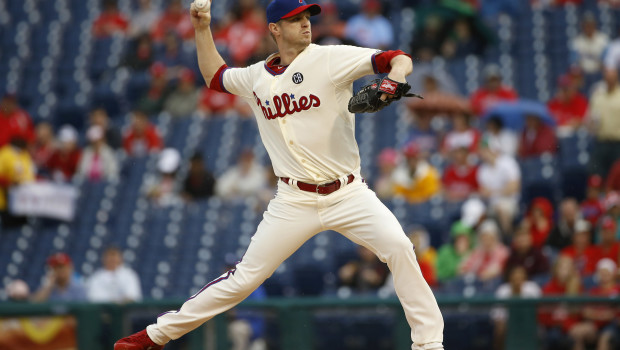 If only the Phillies could play the Padres and Cubs every day!

Pinch-hitter Reid Brignac hit a tie-breaking, two-run double in the sixth inning, John Mayberry Jr. hit a three-run homer and the Phillies beat the Padres 7-3 to complete a three-game sweep.

And now the woeful Chicago Cubs come to town for a weekend series.

Brignac lined a drive off Dale Thayer to the gap in left-center to give the Phillies a 4-2 lead.

Raising his record to 2-6, Kyle Kendrick (photo above) allowed one earned run and seven hits, striking out five in six innings. He earned his second win in 20 starts, dating to last year.

The Phillies have their first three game-winning streak since May 17-20 and recorded just their second series sweep this season. Ken Giles made his major league debut for the Phillies with two outs in the ninth. He threw a 100 mph fastball on his first pitch before Yasmani Grandal hit an opposite-field homer on a 3-1 pitch.

Manager Ryne Sandberg may have to consider a platoon at first, even though Howard is making $25 million per season through 2016 with a $23 million team option for 2017.

Mayberry led off Philadelphia’s sixth with his second double. Domonic Brown lined a single to right on an 0-2 pitch, chasing Stults.

Thayer came in to face Will Nieves, who hit a bouncer to third baseman Chase Headley. His high throw to the plate was in time to get Mayberry. Sandberg challenged the call, but a video review confirmed catcher Grandal tagged Mayberry before his foot touched the plate.

Thayer then struck out pinch-hitter Howard. But Brignac followed with a shot to the wall to give the Phillies a two-run lead.

Mayberry made it 7-2 with his fifth homer of the season in the seventh.