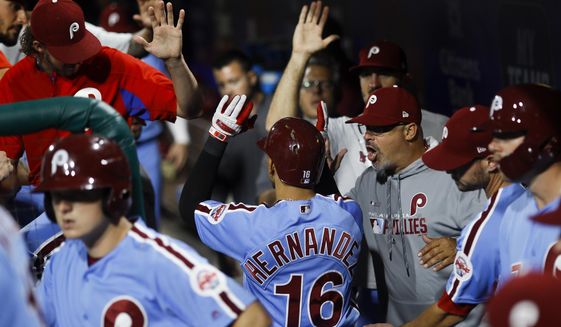 PHILS STROKE 4 HR’S AND STAY 2 OUT OF WILD CARD!

J. T. Realmuto stroked one of four Phillies homers in a 9-5 win over the Braves.

Cesar Hernandez had a homer and an RBI single and Jean Segura and Adam Haseley also went deep for the Phillies, who remained two games behind the Cubs and Brewers for the second NL wild-card spot.

The Phils blew the game open with three runs in the eighth off right-hander Anthony Swarzak thanks to Realmuto’s 25th of the season, a two-run shot, and Sean Rodriguez’s RBI double.

It was the fifth homer in the last eight games and 10th in 26 for Realmuto, who played on his 138th game.

“That gives me extra adrenaline and makes me forget I am tired when the game starts,” he said. “Everybody that plays the game wants to be part of a playoff race, wants to get to the World Series and win the World Series.”

Realmuto became the fifth catcher in Phillies history to reach 25 homers in a season.

Ronald Acuna Jr. hit his 39th homer and Ozzie Albies doubled, homered and drove in a pair of runs for the NL-East leading Braves, who are in front of the Nationals by 8 1/2 games.

The Phillies led 5-4 in the sixth when Hernandez singled to right with two outs to score Maikel Franco from second and make it a two-run game.

Atlanta pulled within a run again in the seventh on Acuna’s two-out drive to center that gave him 95 RBI.

The Braves threatened in the eighth, getting runners to second and third with two outs, but Hector Neris got Dansby Swanson to line out to left for the final out. Neris then pitched a 1-2-3 ninth, registering the final four outs for his 26th save in 32 chances.

Haseley gave the Phils the lead for good by driving an 89-mph, 3-1 fastball from Julio Teheran (10-9) over the wall in right-center to make it 3-2.

Albies put the Braves in front 2-0 in the first with a two-run shot, his 22nd, to left.

Hernandez led off the bottom of the first by going deep to right-center off Teheran, who allowed five runs on five hits in four innings.

Smyly allowed four runs on four hits with six strikeouts and a walk in four innings.