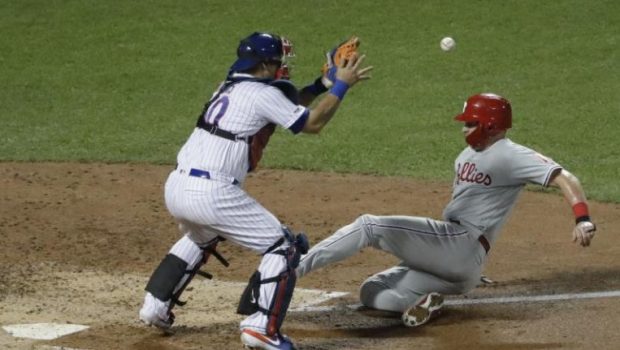 Jay Bruce hit a go-ahead single in the ninth inning off closer Edwin Diaz and the Phillies beat New York 7-2 to retake second place behind the Braves in NL East.

Diaz (1-6) allowed J.T. Realmuto’s double and Bruce’s RBI single to start the ninth, which snapped a 2-all tie. The Phillies then batted around and scoring five runs against Diaz, Jeurys Familia and Luis Avilan. Jean Segura drove in two with a double, and Bryce Harper scored him with a two-base hit to cap a rocky day that started with three strikeouts against deGrom.

”Shows the resiliency of the guys here,” Bruce said.

The Phils tied it in the seventh. Rhys Hoskins scored on Cesar Hernandez’s slow roller toward third, but replays showed catcher Wilson Ramos likely tagged Hoskins before he touched the plate.

Jacob DeGrom allowed two runs and three hits over seven innings, striking out 10 after allowing a homer to Scott Kingery on the first pitch of the game. New York is 16-30 in deGrom’s last 46 starts even though he has a 2.15 ERA in that time. The bullpen lost 14 of those games.

The Phillies have won six straight over the Mets for the first time since a nine-game streak spanning 2007 and ’08. New York has won the season series the past seven years, but Philly is 8-3 in the rivalry this season and needs two more wins to end that skid.

Pete Alonso accounted for New York’s runs with his 29th homer and an RBI double. He scored fellow All-Star Jeff McNeil with the latter against Vince Velasquez to make it 2-1 Mets in the fifth.

Adam Morgan (3-3) got two outs on two pitches to end the eighth.