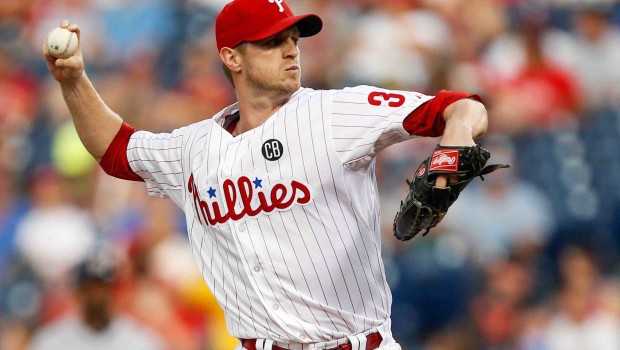 PHILS STOP A STREAK AND BEAT THE ASTROS IN 15 INNINGS

The Phillies had scored just two runs in their last 36 innings.

And then, last night when Grady Sizemore started the 15th inning with a smash past Astros second baseman Jose Altuve, advanced to second on a sacrifice bunt from Ben Revere.

Jimmy Rollins flied out for the second out as Astros right-hander Jake Buchanan intentionally walked Utley to face Ryan Howard, who was 0-for-5 with one hit by pitch in those situations. He once reached on an error.

Howard delivered the 10th walk-off hit of his career with a single through the shift to right field. Astros right fielder Robbie Grossman threw to the plate, but it was not on target as Sizemore slid home safely, and the Phils won 2-1

Howard hit a home run to left-center field in the second inning against Astros left-hander Dallas Keuchel. It was his 17th homer of the season as he tries to recapture some of the power and production that made him a $125 million man.

Howard entered the game with a .363 slugging percentage and a .664 OPS — both woeful.

Phillies manager Ryne Sandberg has stuck with Howard in the cleanup spot anyway.

“You know, I think you guys forget what I’ve done,” Howard said. “You guys look at what’s going on right now. People forget what I’ve done. Ryno has played the game. He knows. He knows the ups and downs of the game and he knows you’re going to have good days and bad days. For me, I’m just going to go out there and grind it out.”

Phillies right-hander Kyle Kendrick (photo above) made his 23rd start of 2014 as he tried to salvage a season that has been a disappointment. He entered the night with a 4.92 ERA, which ranked 89th out of 94 qualifying pitchers in baseball.

He retired the first 10 batters he faced and faced the minimum 12 batters through four innings. He cruised through six scoreless innings when he opened the seventh with a walk to Chris Carter.Jason Castro followed with a single and Jon Singleton followed Castro with a single to left-center field to score Carter to tie the game at 1.

Kendrick allowed five hits, one run, one walk and struck out three in seven innings. The Phillies’ bullpen followed with eight scoreless innings, allowing only one hit and four walks while striking out 14.

“The bullpen was outstanding,” Sandberg said.