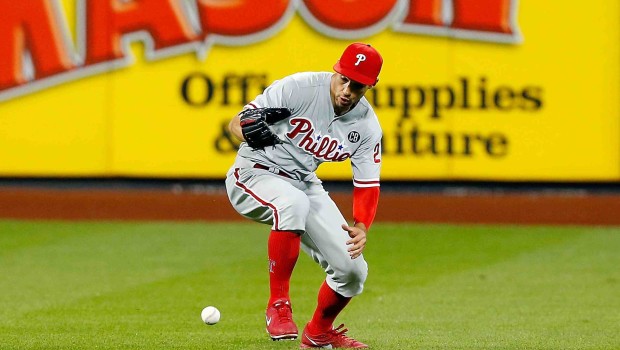 PHILS STAY IN LAST PLACE THANKS TO TYPICAL FIELDING FAILURES

“Right now that’s the kind of break that we need until we get it going offensively,” Eric Campbell said.

Campbell stole home on a double steal, and Travis d’Arnaud hit an RBI single to help the Mets stay out of the NL East cellar with their 12th victory in 17 games against the Phillies this year.

Cody Asche had a run-scoring single for Philly, which had won four straight and six of seven. A victory in the series opener would have pushed the last-place Phillies past New York, but Sizemore’s two-out error with the bases loaded in the seventh cost them.

“Routine play, had it the whole way, saw it fine, was under it, just missed it,” the left fielder said. “It does not get much worse than that. The guys played hard — I just happen to be the guy who let the team down. Really all there is to it.”

In a matchup of rookie right-handers, deGrom (7-6) allowed four hits and an unearned run. He struck out five and walked two, throwing 70 of 103 pitches for strikes in his second start since coming off the disabled list.

Mets second baseman Dilson Herrera went 0 for 3 with an error in his major league debut. The 20-year-old Herrera was called up from Double-A Binghamton to fill in for injured Daniel Murphy.

David Buchanan tossed six innings for the Phillies, giving up one run and four hits before he was pulled for a pinch hitter after only 64 pitches.

New York took a 4-1 lead in the seventh, scoring three unearned runs without a hit.

Juan Lagares lofted a high pop to shallow left-center, and Sizemore was under it when the ball deflected off his glove for an error that allowed two runs to score. Sizemore won Gold Gloves with Cleveland in 2007 and 2008.

“Yeah, we were pretty pumped up in the dugout. There was no question, because we haven’t been scoring. You take every gift you can get right now,” Mets manager Terry Collins said.

With runners at the corners, Lagares stole second and Campbell broke for home, beating the return throw from shortstop Jimmy Rollins with a headfirst dive at the plate.

“We had to look at the guy at third there,” Phillies manager Ryne Sandberg said.

Campbell became the first Mets player to steal home since Jason Pridie in Houston on May 15, 2011, the team said.

“We just thought we’d take a shot at it, and it paid off,” Collins said.

Jeurys Familia worked a scoreless eighth, and Jenrry Mejia struck out three in the ninth for his 20th save in 23 attempts.

The Phils tied it in the seventh on Asche’s run-scoring single after a throwing error by first baseman Lucas Duda. Carlos Ruiz popped up a bunt for the first out of the inning, and deGrom limited the damage when he started an inning-ending double play with an athletic stab of a sharp comebacker by pinch-hitter Domonic Brown.

“It was hit pretty good. I just reacted to it and stuck my glove out there and it went in,” deGrom said.