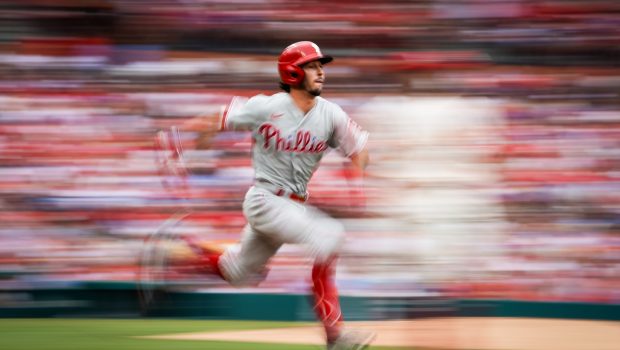 Kyle Gibson reversed his fortunes and Alec Bohm broke a scoreless tie with a sacrifice fly in the ninth inning as the Phils edged the Cardinals 1-0 to take a two-game lead for the last wild card spot.

Gibson, tagged for four straight home runs by St. Louis in the first inning at Citizens Bank Park in his previous start, combined with a pair of relievers on a two-hitter.

The Phillies have won three games in a row and five of their last six.

Gibson gave up two hits and walked none in seven innings.

Cardinals starter Dakota Hudson allowed two hits and two walks in six scoreless innings after not pitching beyond the fifth in each of his previous four starts. St. Louis has lost seven of nine.

Darick Hall led off the Phillies ninth with a double against Giovanny Gallegos(2-3). Pinch-runner Mickey Moniak became the first runner of the game to reach third base on Didi Gregorius’ bunt single and Bohm followed with his go-ahead fly.

Yepez drew a leadoff walk from Corey Knebel to begin the St. Louis ninth and took third when Bohm threw away a grounder by Paul Goldschmidt.

Goldschmidt stole second base as Arenado struck out, then Knebel retired Carlson on a weak grounder and Corey Dickerson on a fly to the warning track. Knebel got his 12th save in 16 chances.