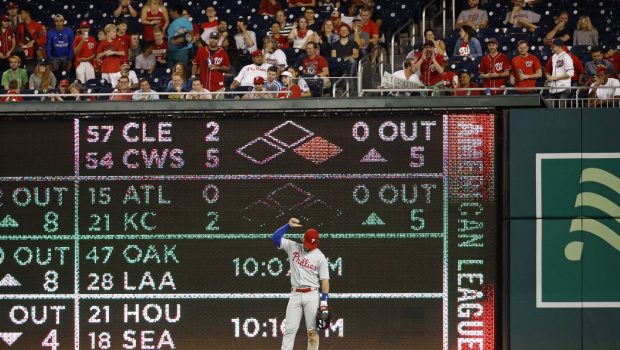 The Phils are optimistic about their outfield for a couple of reasons.

First, they have Bryce Harper (above) in right. He put up solid numbers in his inaugural season with the Phillies. Everybody seems to think a more comfortable Harper can put up even bigger numbers in 2020.

Second, Philly believes Andrew McCutchen is healthy and ready to go following ACL surgery in June. He was one of the best leadoff hitters in the Majors until the injury. The Phillies’ leadoff spot and offense never recovered. If McCutchen returns to form, he will provide a steady presence atop the lineup.

There is uncertainty in center field. The Phils outrighted veteran Odúbel Herrera to Triple-A on Jan. 16. Adam Haseley is projected to get the majority of the playing time in center. He showed flashes of his potential in September, both offensively and defensively. But he has not played an entire season. It will be a test.

Jay Bruce can man either corner-outfield spot. He is a lock to make the team. Roman Quinn seems like an ideal bench player because of his defense and speed. Nick Martini and Nick Williams are on the 40-man roster. They could compete for bench jobs. Matt Szczur and Mikie Mahtook are in camp as non-roster invitees.