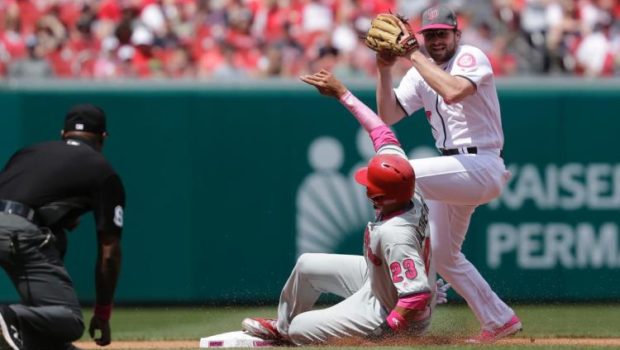 PHILS SPLIT WITH NATS, WHO MIGHT HAVE A WORSE BULLPEN!

Are you ready for this?

There might be a team with a worse bullpen than the Phillies!

Max Scherzer endured a scary line drive to grind out six innings, Michael Taylor hit a go-ahead two-run homer in the eighth and Washington overcame another dodgy bullpen outing to earn a 6-5 win in Game 2 over the Phillies.

Bryce Harper went 3 for 4, doubled and drove in two runs in Game 2. He also belted his 12th home run in Game 1, but the Phils won 4-3 after Washington’s third blown save in six games.

The Nationals blew another one later when Freddy Galvis’ two-run triple off Jacob Turner (2-1) put the Phillies ahead 5-4 in the eighth.

After striking out three times, Taylor homered off Pat Neshek (0-1), belting a first-pitch slider off the left field foul pole. The runs were Neshek’s first allowed this season.

Matt Albers worked the ninth in Game 2 for his second save after Shawn Kelley blew a save in Game 1. Ty Kelly had a tiebreaking single during a three-run ninth in the day game.

Scherzer was drilled in his left knee by Michael Saunders’ shot in the fourth inning and went tumbling. After briefly climbing to his feet before returning to the ground, he was still grimacing several minutes later while being examined by a Nationals medical staff member.

He eventually got to his feet, threw three warmup pitches and gave a thumbs-up sign, sending Baker back to the dugout.

Scherzer allowed two runs in the fourth and another in the sixth but escaped further damage when Brock Stassi was tagged out at home trying to score after misreading an infield single. 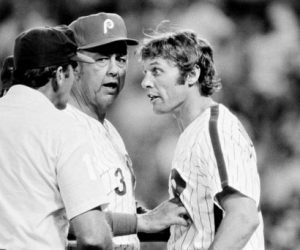 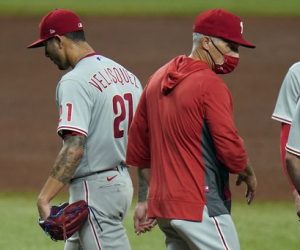 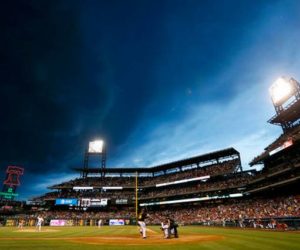