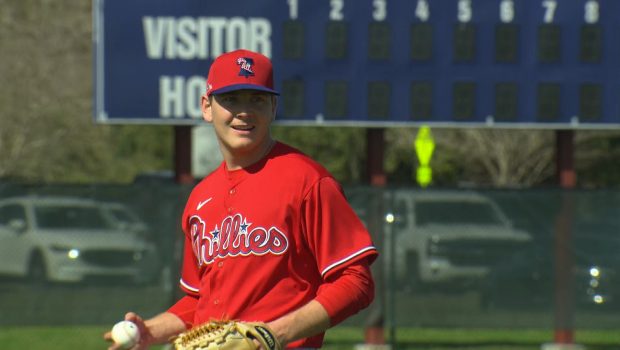 The Phils top pitching prospect Spencer Howard made his Grapefruit League debut in the eighth inning of yesterday’s win over the Twins.

And he flashed enough stuff to calm down the fans who wanted the team to sign another pitcher after Zack Wheeler.

Howard allowed two hits and struck out one in a scoreless inning, throwing 17 pitches (12 strikes).

Howard threw only 91 1/3 innings last season, including the Arizona Fall League, so the Phillies aren’t overburdening him this spring.

“Obviously you really get excited about that arm,” manager Joe Girardi told MLB.com. “His ability to pitch deep into games, swings and misses. I’ve watched his bullpens and they’ve been good and crisp. For him to be able to carry it out here his first time, that’s a positive.”

Howard allowed a single to Brent Rooker and a one-out single to Astudillo to put runners on first and second. But he got Jimmy Kerrigan to fly out to right field and he struck out Wilfredo Tovar looking on a fastball away to end the inning.

“It felt good,” Howard said. “A little jumpy, too much energy towards the beginning, but I got in a groove near the end and felt good, overall. I feel healthy.”

Howard watched Wheeler pitch beforehand. He smiled when asked what it might be like to be pitching together at some point.

“It’s crazy,” he said. “He’s obviously really good. His fastball is explosive. His changeup is good. His curveball is good. Everything is good. He locates well. What else can I say? Yeah, it’s good. … Just watching how [the other starters] go about their business and their preparation, more than anything has been the biggest takeaway for me. I’ve said it before, but it’s not an accident that they’re big leaguers. Their work proves it.”