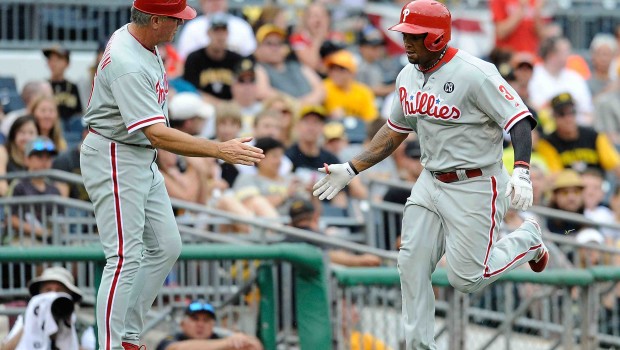 PHILS SINK TO 1997 LEVEL OF INCOMPETENCE

“I’m not losing faith in it,” Phila manager Ryne Sandberg said following Sunday’s 6-2 loss to the Pirates, who swept the series at PNC Park. “We’ll continue to have the guys fight and battle and try and break out of it. There’s more potential there in my opinion than what we’ve shown.”

But Sandberg’s club is 37-51, making it the first Phillies team to lose more than 50 games before the All-Star break since the 1997 Phillies entered the break at 24-61. The Phillies have lost 13 of their past 16 games, with 20 games remaining before the July 31 non-waiver trade deadline.

It seems fait accompli that changes are coming. It is only a matter of when and with whom.

“I try not to look too far into the future,” Chase Utley said when asked if he wondered what this team might look like on Aug. 1. “I try to prepare for the next day. A lot can happen between now and the end of the month, both good and bad. We’ll see how it plays out.”

“It’s very hard to believe,” Phillies right-hander A.J. Burnett said. “There’s a lot of talent in this room beyond what we’re doing. No question. Find a way to keep plugging, man. I know I say that every time I start, but that’s the truth. You can’t get down. You can’t pout. You can’t hang your head. Fifty-one losses, that’s not good at all. You’ve got to come in and somehow stay in the right frame of mind and try to keep plugging.”

The Phillies took a 1-0 lead in the first inning when Jimmy Rollins reached second on a throwing error from Pirates third baseman Pedro Alvarez and scored on a single to left field from Marlon Byrd. But Pirates left-hander Jeff Locke faced the minimum numbers of batters into the seventh inning, when Byrd hit a one-out solo home run to left field to cut the Pirates’ lead to 3-2 (photo above).

Byrd has 18 home runs, which is tied for eighth among right-handed hitters in baseball. He picked up two of the Phillies’ four hits Sunday. The team hit just .124 (11-for-89) for the series. They have hit .206 and averaged just 2.56 runs a game over their 16-game slide. They have hit .148 with runners in scoring position in that stretch.

But it has been more than just the past 16 games. The Phillies have scored two or fewer runs in 35 of their 88 games this season, or 40 percent of them.

“I feel like we have a better offensive team than how we’ve performed over the course of the year,” Utley said. “We’ve had some really good games, and we’ve had too many not-so-good games. I mean at this point, going forward, we have to continue to grind out at-bats and try to stay positive.”

Burnett allowed five hits, three runs and two walks with seven strikeouts in seven innings against his former team. He struck out the first two batters he faced in the first, when Andrew McCutchenreached on an infield single. Neil Walker followed with a single, and Russell Martin followed with a double to score both runners to hand the Pirates a 2-1 lead.

Josh Harrison tripled and scored in the third to make it 3-1.

Phillies relievers Justin De Fratus and Jake Diekman combined to allow three runs in the eighth to put the game out of reach.