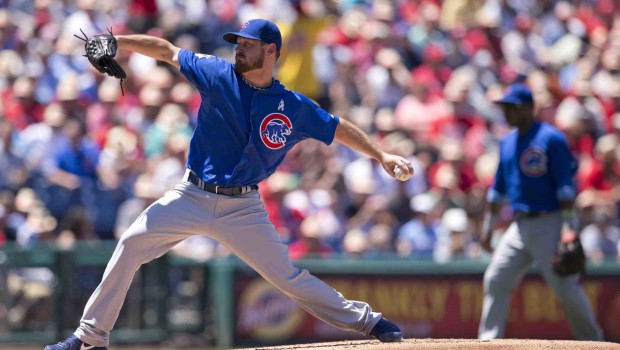 PHILS SINK TO THE LOVABLE BUT WOEFUL CUBS' LEVEL The Phils made Travis Wood (top photo) look as effective as Bunning.

With Jimmy Rollins’ pursuit and capture of the Phils’ all-time hit record in the rearview mirror, on Sunday the Cubs beat the Phils 3-0 to take two out of three games and win their first series on the road since last September, so the question must be asked?

Are the Phillies now worse than the woeful-forever–but-lovable Cubbies?

The answer is a resounding yes.

The Phillies’ hitters made Chicago starter Travis Wood look a little like Phils’ great Jim Bunning, who was honored on the 50th Fathers Day celebration of his 1964 perfect game.

Wood worked eight innings, the first 5 1/3 without giving up a hit, in the Cubs’. The left-handed starter allowed a pair of hits in the sixth, but worked out of that jam on the way to his seventh win of the season. Phillies starter A.J. Burnett fell victim to a lackluster Phillies offense, as he dropped to 4-6.

Burnett gave up three runs on eight hits with four strikeouts and no walks in eight innings.

“On the offensive side, we had three hits and three walks for the game. Wood was pitching up in the zone and we were hitting fly balls. We were underneath him the whole game.”

In what has been a frustrating season for the Phillies — seven times, the Phillies have been shut out at home, something that hasn’t happened in the first 2 1/2 months in any of the 10 seasons that Citizens Bank Park has been open.

“We got three hits and we swung the bats against some pitches,” Phillies right fielder Marlon Byrd said. “We had chances with runners in scoring position. Bottom line is we didn’t get it done.

“I think every game is critical when you are trying to get back to .500. You don’t look at it as a critical point — we have to start winning games and make it easier. And we’re going to face two of the best pitching staffs in baseball [in Atlanta and Miami]. It doesn’t get easier. So we have to battle.”

On July 10, 2010, Wood, then a Reds starter, carried a perfect game through eight innings against the Phillies, but Carlos Ruiz broke it up with a double in the ninth.

With one out in the sixth, Ben Revere singled to right-center to end Wood’s no-hit bid on Sunday. Down 3-0, the Phillies’ focus quickly changed to getting a run, and after a single by Rollins, they looked close to breaking out, but Chase Utley and Byrd were retired on back-to-back popouts to end the threat.

Meanwhile, Chicago opened the scoring in the first as Anthony Rizzo hit his 14th home run of the season, this on the first offering from Burnett for a 1-0 lead.

“Yeah, that’s about it, man,” said Burnett, who has allowed five earned runs in his last 15 1/3 innings of work. “Sinker didn’t get in early and a couple hooks. Take those couple pitches away, and it’s a different ballgame.

“We’ve just been hot and cold and inconsistent on a string of games on the offensive side of things,” Sandberg said. “Everybody’s had a chance, everybody has had opportunities, we just haven’t been able to put numbers up on the board consistently.

“On the other side of the coin, our pitching has kept us in games, and our bullpen has been outstanding for about a month. On the offensive side of things, it’s about picking it up on the offense.”