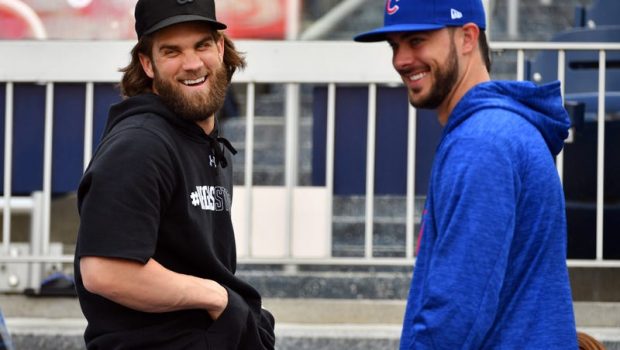 PHILS SHOULD TRADE FOR KRIS BRYANT, EVEN IF IT COSTS ALEC BOHN!

With the blockbuster trade that sent Mookie Betts and David Price to the Los Angeles Dodgers, Cubs third baseman Kris Bryant is now drawing a lot of attention.

He recently lost his service time manipulation grievance against the Cubs, which means he will become a free agent after the 2021 season, which makes him an attractive, cost-effective trade piece.

The Phillies are one of the teams that have already been linked to the Cubs and Bryant with “exploratory interest,” according to Bob Nightengale of USA Today.

Philly signed Zack Wheeler and Didi Gregorius, and could be looking for another piece in chase of a World Series in a competitive NL East.

Yet, doing so would put the Phillies over the dreaded luxury tax that is causing teams to deal such star players, but it just might be worth it. Bryant is only 28 and would fill a need for the Phillies at third base and give them another star along with Bryce Harper, who just so happens to be close with Bryant (above) as the two played together as teenagers.

The price for Bryant may start with Phillies top prospect Alec Bohm, who will be 24 in August. It makes sense from the Cubs’ perspective as he can fill Bryant’s shoes at third base once he is ready for the majors. The Dodgers had to find a third team involved to help sweeten the pot for the Red Sox in the Betts deal, so if the Phillies don’t want to part with Bohm they may have to get creative.

But why would the Cubs, a team that was in the thick of the playoff race last season, trade its All-Star third baseman?

The same reason why the Red Sox traded Betts: money.

Bryant is set to make $18.6 million in 2020, and reportedly rejected a $200 million contract with the Cubs already. With the Red Sox now setting the precedent of a big market team moving a star player to get under the luxury tax threshold, the Cubs are likely to follow suit.

The extra year of service time does buy the Cubs some time as well, but there are already reports that the organization has been in trade talks involving Bryant. Here are some of the possible destination.