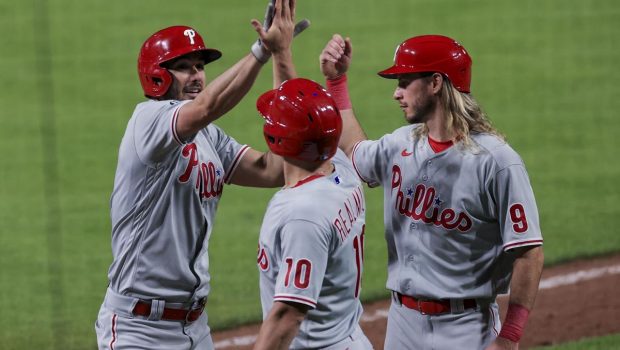 PHILS SHOULD HAVE SAVED SOME OF THOSE 17 RUNS FOR TODAY!

The Phillies have been scuffling for runs all season the way a minor leaguer desperately wants a base hit.

So, last night’s 17-run explosion was not only long overdue but curious.

Why can’t they hit like this all the time?

Odúbel Herrera and Andrew McCutchen each hit two of their seven home runs and they pummeled the Cincinnati Reds 17-3 to end a three-game losing streak.

Matt Joyce capped the rout with a grand slam in the ninth off Reds infielder Alex Blandino, who was on the mound to help spare the bullpen.

“I think today was one of those days where everybody could kind of take a deep breath, sit back, enjoy it, have fun,” said Phillies third baseman Alec Bohm, who had three hits.

Herrera, McCutchen and Rhys Hoskins all connected as the Phillies broke it open with a six-run sixth inning. McCutchen’s second homer, a three-run shot, came in the eighth as the Phillies avenged an 11-1 pounding by Cincinnati on Monday.

“We got behind 2-0 and we get a couple home runs to get back in the game, and the guys never stopped,” Phillies manager Joe Girardi said.

Nick Castellanos singled and doubled for the Reds to extend his hitting streak to 18 games, the best in the big leagues this season. His .361 average also leads the majors.

Tyler Naquin hit a two-run homer in the Reds second.

Phillies starter Aaron Nola (4-4) allowed three runs through five innings and induced double-play grounders to end the second, third and fourth. His fifth-inning strikeout of Jesse Winker was the 1,000th of his career.

Sonny Gray (1-4) gave up four runs in 4 2/3 innings for the Reds. The Phillies hammered relievers Heath Hembree and Amir Garrett in the sixth.

“A night to forget,” Reds manager David Bell said. “That’s all we can do. In fact, we’ve already done that.”