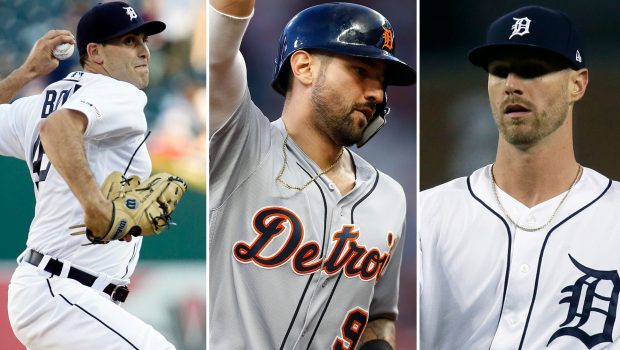 PHILS SHOULD CLEAN UP IN TRADE FOR TIGERS PITCHERS!

The Phillies are desperate for pitching and the Tigers seem ready to throw in the 2019 towel, making them one of the most intriguing sellers in baseball ahead of the July 31 Trade Deadline, says Jon Morosi of MLB.com.

They are 25-42 in AL Central and will listen to offers for starter Matthew Boyd, closer Shane Greene and right fielder Nicholas Castellanos, among others.

The Phillies, who are searching for both rotation and bullpen upgrades, are a potential suitor for both Boyd and Greene, who is tied for the AL lead with 19 saves. Greene is slated for one more season of salary arbitration eligibility in 2020 before becoming a free agent, which makes him more valuable than relievers on expiring contracts.

Boyd, 28, likely represents the Tigers’ most difficult decision. The left-hander has emerged as an All-Star candidate this year, ranking among the top 10 in the Majors with 105 strikeouts while posting a career-best 3.08 ERA. Boyd also is revered in the organization for his clubhouse leadership and philanthropic work.

Boyd isn’t eligible for free agency until after the 2022 season, meaning he could be in Detroit for one or two contending years if the rebuild is completed on schedule. The Tigers also could pursue a multiyear extension with Boyd, a plausible route considering the payroll flexibility the team is set to enjoy in the coming years.

For those reasons, the Tigers would need to be overwhelmed in order to trade Boyd, but that possibility could exist, due to the expected shortage of top-end starting pitchers on the midsummer trade market.

Among teams on the buying bubble, like the surprising Rangers, the controllable Boyd is a more sensible acquisition than Madison Bumgarner, who is eligible for free agency after the season. The Yankees may well prefer Boyd to Bumgarner, too, since Boyd could help them replace the retiring CC Sabathia in next year’s rotation.

Notably, the Yankees have a strong firsthand scouting report on Boyd: He struck out a career-high 13 batters in a win at Yankee Stadium on April 3 this year.