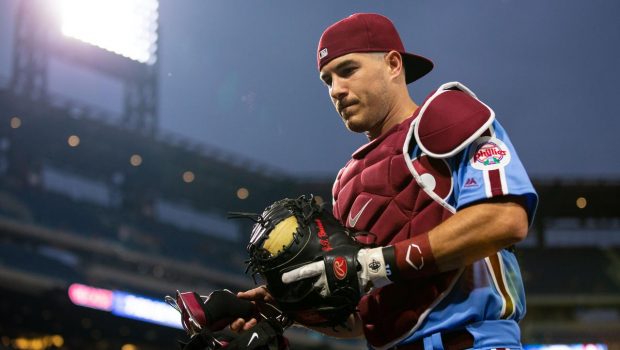 PHILS SCREWED UP BIG ON REALMUTO’S DEAL: CAN THEY KEEP HIM?

Nothing is more urgent on the Phillies offseason plate than to salvage the mess they made of JT Realmuto’s contract negotiations.

The catcher and the team went to arbitration a year ago and couldn’t agree on the difference between the $12.8 million JT wanted and the $10 million the team offered.

So they could have made him an offer.

But no, thanks to a massive miscalculation by then-GM Matt Klentak.

They had traded for the catcher in 2019, giving up primo pitching prospect Sixto Sanchez and catcher Jorge Alfaro.

Sanchez has turned out to be a star for the Marlins, and the Phillies now have their thumb up their ass unless they somehow retain Realmuto, who is a lock to receive a one-year, $18.9 million qualifying offer, which must be made no later than five days following the final game of the World Series. Realmuto has 10 days to accept or reject the offer.

He will reject it. If he accepts it, he is no longer a free agent and is signed to a one-year deal with the Phillies.

Realmuto is eyeing a record-shattering contract for a catcher, perhaps in the $200 million range. If he rejects the qualifying offer and signs elsewhere, the Phils will receive Draft pick compensation. It will be a small consolation prize, especially if they watch Miami’s Sixto Sánchez pitch against them for the next several years.

Regardless, the club is not optimistic that Realmuto will return.

“Can you tell me what the governor and the mayor of Philadelphia are going to allow us to have next year in the way of fans?” Phillies managing partner John Middleton said. “Because if you do, you know something that I don’t. So I have no idea what we’re going to be allowed. Obviously, that will determine our revenues, and revenues determine what you can do and what you can’t do.”

In normal times, the Phillies could make a qualifying offer to Gregorius, but they might not believe he will get more than $18.9 million on the open market. They could roll the dice and try to re-sign him for less. Every dollar counts this offseason.