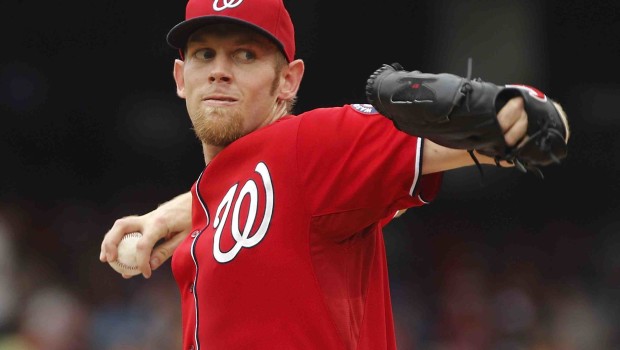 Stephen Strasburg (photo above) struck out 10 while pitching three-hit ball for seven innings, earning his first win in a month as the Nationals beat the Phils 4-0 Sunday at Nationals Park..

”I just felt like I could command both sides of the plate today,” said Strasburg, who walked only one.

Strasburg (8-9) had been 0-3 in his previous five starts, losing his last three outings.

The NL East-leading Nationals split the four-game series after dropping the first two to the last-place Phillies.

Denard Span had two hits, two steals, an RBI and scored a run for Washington while reaching base for the 29th consecutive game.

Afterward, the center fielder gave his take on what makes Strasburg this kind of dominant.

”Today he was hitting his spots inside, and seemed like he had his arm slot pitching inside and just kept those guys guessing,” Span said. ”Normally, he’s just throwing his fastball middle-away, middle-away. And guys were able to kind of cheat to his fastball.”

Phils starter Cole Hamels (6-6) allowed an unearned run over seven innings. The left-hander gave up four hits and struck out six in his second consecutive start without an earned run. He has given up one earned run or fewer in nine of his last 13 starts.

The pair allowed five combined earned runs while dueling to no-decisions in Washington’s 5-3 victory over Philly on July 12.

”He and I are just trying to compete at the highest level and put up as many zeroes as we possibly can against each other,” Hamels said. ”I think it brings the ultimate competition out.”

The Phillies were shut out for the second straight day and haven’t scored in 21 innings.

”Hard to not think it’s a waste of a solid start, but we weren’t able to get to Strasburg,” said Phillies manager Ryne Sandberg.

Cody Asche got two hits for the Phillies, but also committed an error at third base on Jose Lobaton’s chopper that led to Washington scoring in the third inning.

After dropping the ball, Asche grabbed it and his wide throw pulled first baseman Ryan Howard off the bag. Strasburg sacrificed and Span hit a looping single into right-center.

The Nationals got three runs in the eighth off reliever Ken Giles.

After Asche’s two-out double in the fifth, he appeared to be picked off on Lobaton’s throw from behind the plate to shortstop Ian Desmond. Second base umpire Tripp Gibson’s safe call stood after a challenge and review of more than three minutes.

”Early on in a game, we’re not going to go out there unless we think we’re sure,” said Williams. ”So we saw it one way and New York saw it another.”