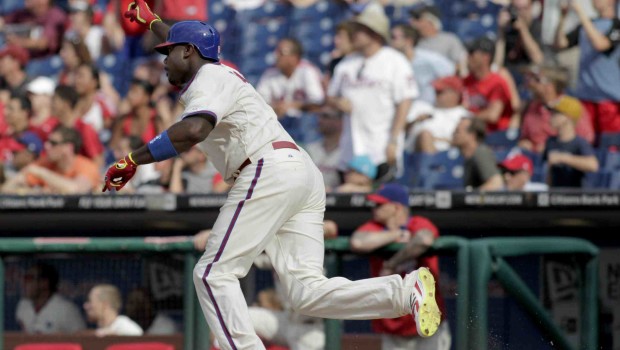 Say what you will about Ryan Howard, but he is turning out to be major league baseball’s best .218 hitter. And especially to the Phillies.

Howard singled with two outs in the ninth inning after pinch-hitter Marlon Byrd had a tying hit and the Philadelphia Phillies pulled out a 7-6 victory over the New York Mets on Sunday.

“You’re not out of it until 27 outs,” said Howard, who was mobbed by his teammates near first base after the hit. “It was a little hectic but, you know what? I’ll take it.”

Utley singled, tripled, homered and drove in three runs for the Phillies, who snapped a five-game skid against the Mets.

The Mets appeared positioned for their 12th victory in the last 13 games against the Phillies before the ninth.

Cody Asche led off with a double off Jenrry Mejia (5-5) and scored when Byrd lined a hit up the middle. Two outs later, Byrd stole second and, after getting the count to 3-2, the Mets intentionally walked Utley.

Howard followed with a single to right on a full-count pitch.

The beleaguered slugger, who recently was benched for three games, pointed skyward after rounding first before getting mobbed by his teammates near first base.

“That’s big for his confidence,” said Philly manager Ryne Sandberg, who benched a slumping Howard for three days in late July. “He’s been in these situations before. Right guy in the right place.”

It was the second time in six games Howard faced the scenario. The Astros walked Utley for Howard on Tuesday and the Philly slugger singled home the winning run in a 2-1, 15-inning victory.

“I wasn’t surprised at all,” Howard said. “The winning run on second base and I didn’t have any hits. I still have great confidence. I feel real good about my swing.”

While Howard wasn’t surprised, Mejia was.

Collins stood by his decision.

“I’m not going to let (Utley) beat me,” he said. “Howard’s been struggling. You’ve got to make him beat you. In my book, that’s the way I look at it.”

Zack Wheeler allowed three runs on three hits in six innings. He is 4-0 with a 1.94 ERA in his last eight games.

Kyle Kendrick extended his struggles this season. The right-hander was charged with six runs — five earned — on 10 hits in five innings.

“He struggled with balls over the plate,” Sandberg said.