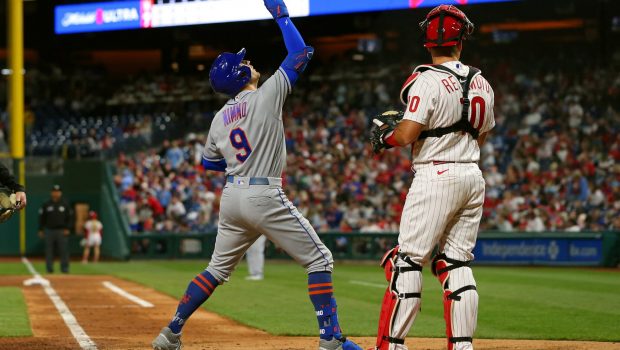 PHILS RUN OUT OF LATE-INNING MAGIC — OR ANY AGAINST METS!

Francisco Lindor had an RBI single for the Mets, who recovered from blowing a four-run lead in the eighth inning against the Phils on Monday night.

Megill (2-0) got his spot in the rotation only when Jacob deGrom, a two-time NL Cy Young Award winner, was sidelined by a shoulder problem in spring training.

Megill gave up just three hits, walked none and struck out five in 5 1/3 innings.

Reliever Chasen Shreve got Kyle Schwarber to ground out and fanned J.T. Realmuto to preserve a 1-0 lead.

Philadelphia threatened again in the seventh when Nick Castellanos doubled with one out, but Drew Smith struck out Rhys Hoskins and Didi Gregorius to the delight of the many Mets fans among the 26,045 in attendance at Citizens Bank Park.

“It’s a good win for us early in the season after last night,” Showalter said.

Shreve and Smith combined to give up one hit in 2 2/3 scoreless innings with four strikeouts.

Edwin Díaz struck out three in the ninth for his first save in the combined five-hitter. He fanned Hoskins with runners on first and second to end it.