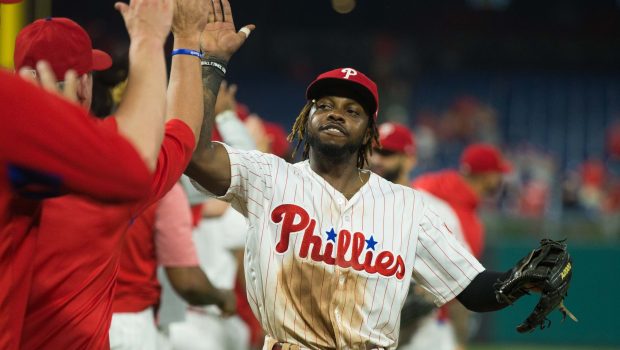 PHILS ROMAN QUINN TRIED TO BUNT, GOT 9 STITCHES FOR HIS TROUBLE!

Roman Quinn left last night’s Phils game after the second inning because of a cut on his right index finger required nine stitches to close. X-rays were negative.

Phillies manager Joe Girardi said Quinn, who was wearing a splint after the game, is likely headed to the 10-day injured list.

Quinn tried to bunt in the second, but his right hand wrapped too far around the barrel of the bat. His finger was hit with a 90 mph cutter as he fouled it off. Quinn stayed in the game and singled to left before reaching third on a two-base error.

“No, man. I’m a savage, man,” said Quinn, asked if he was surprised if he singled after cutting himself so badly. “I grind through whatever. You feel me? I’m a little surprised. I honestly was like, ‘Man, it feels numb. But I feel like I can get through it.’ Then, once I got to third and I made the last out, I took my glove off and saw that I was bleeding. I was like, ‘Oh, that explains why it’s still kind of numb.’ We took a look at it. It was a deep gash up in there.”