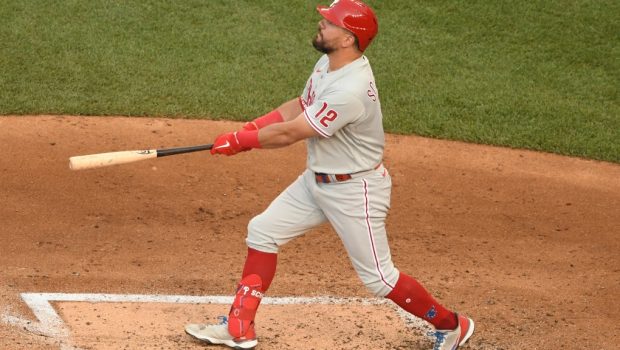 “You have to be able to jump on mistakes, and we did it tonight where we put up seven with two outs,” Schwarber said. “It was really cool to see.”

The last-place Nationals have lost five in a row and eight of their last 10. They have dropped nine in a row to the Phillies dating to last season, their longest skid against their NL East rival since a nine-game slide in 2009.

Wheeler (6-3) allowed one run and four hits in seven innings while striking out three. The right-hander improved to 3-0 with a 1.42 ERA in three starts this month.

The Phillies blew the game open with a two-out rally in the third that started when Washington second baseman César Hernández misplayed Yairo Muñoz’s sharp grounder up the middle. Schwarber then drilled a 1-0 fastball from Patrick Corbin into the center field seats.

Things spiraled from there for Corbin (3-9), who yielded a double and a walk before Nick Castellanos and J.T. Realmuto delivered consecutive RBI singles. Both scored on Didi Gregorius’ double, and Gregorius came around for the inning’s seventh unearned run when first baseman Josh Bell sailed a throw to Corbin on Alec Bohm’s grounder.

“It was a tough inning there, for sure,” Bell said. “It seemed like everything that could go wrong did.”

Schwarber led off the fourth with a solo shot to right. It was his 17th career multi-homer game and his third in 2022, his first season with Philadelphia. Schwarber has hit seven home runs this month after hitting 16 for Washington last June.

“You saw it last year, all the home runs in that short period of time,” Thomson said. “When he’s locked in, it’s pretty special.”

Bell homered in the fourth for Washington.