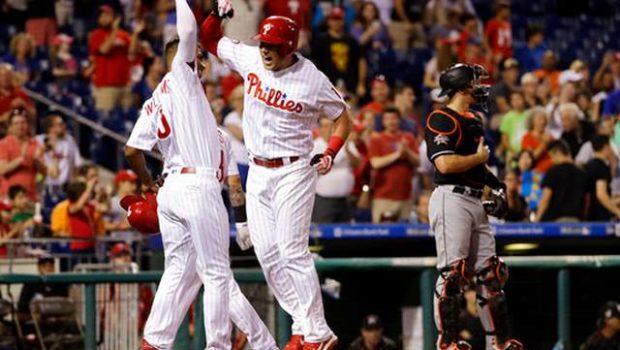 Rhys Hoskins homered and drove in five runs, Mark Leiter Jr. allowed one hit over seven innings, and the Phillies blitzed to an 8-0 victory over the Miami Marlins.

Hoskins blasted Justin Nicolino’s 3-2 pitch an estimated 445 feet into the upper deck in left field, a three-run shot that put the Phils in front 5-0.

“The more that at-bat went on, the more comfortable I got,” Hoskins said. “He left the pitch over the middle of the plate and I didn’t miss.”

Hoskins has clubbed seven homers in 14 games since his call-up from Triple-A earlier this month. He has 16 RBI during that time.

Leiter (2-3) didn’t allow a hit until Miguel Rojas doubled to lead off the sixth with a hard chopper that bounded over the head of drawn-in third baseman Maikel Franco. He struck out five and walked two to help the Phillies rebound from a doubleheader sweep Tuesday in which the Marlins homered six times while scoring 19 runs.

Leiter is the son of former Phillies pitcher Mark Leiter and the nephew of two-time All-Star left-hander Al Leiter.

After Tommy Joseph’s two-out RBI double in the first gave the Phillies a 1-0 lead, they broke out with five runs on six hits in the third.

Hoskins put them in front 8-0 in the sixth with a two-run double just inside third base.

Leiter’s outing was a much-needed one for the Phillies, who used six relievers on Tuesday and recalled right-hander Drew Anderson prior to the game to shore up the bullpen.

Phillies rookie catcher Jorge Alfaro doubled in the third inning has a hit in all nine of his games this season.