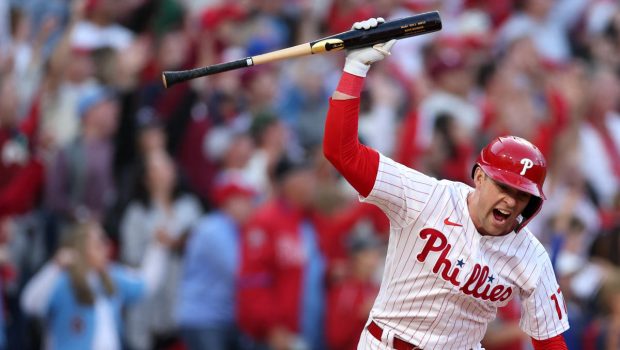 Rhys Hoskins raised his arms and then spiked his bat — a moment right up there with Allen Iverson’s step over Ty Lue in the 2001 NBA Finals and the Philly Special in the 2018 Super Bowl.

Hoskins then trotted around the bases in front of 45,538 fans already in a tizzy over the Phillies’ first home playoff game in 11 years.

The whole thing felt like an out-of-body experience for the veteran slugger.

“It’s just the moment, man,” he said. “I didn’t know what I did until a couple innings later, really.”

Hoskins burst out of his postseason malaise with a three-run homer and slammed his bat in celebration, and Bryce Harper hit a two-run shot that sent Philadelphia to a 9-1 win over the Atlanta Braves in Game 3 of their NL Division Series on Friday night.

“Yes, of course,” Hoskins said after the Phillies 9-1 win.

“I’m human. I’m a competitor. They’re obviously telling me something right away before I even step in the box.”

Still thinking about this pic.twitter.com/pLdd2PAMqL