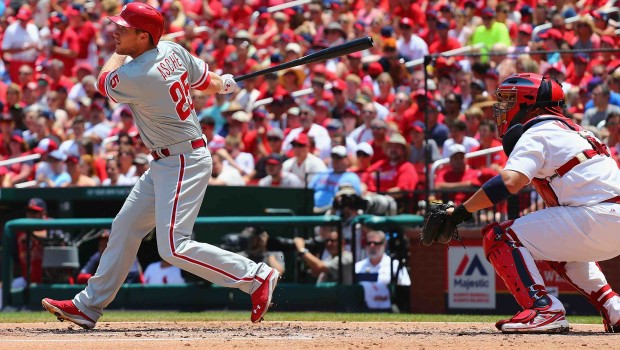 PHILS RETURN WITH HOPE THEY HAVE TURNED THE CORNER

The Phils returned home for tonight’s series with the Miami Marlins with a sense of hope rather than despair, which is how they started the road trip that ended in St. Louis.

Despite a 5-3 loss Sunday against the Cardinals, their second straight defeat to end this seven-game road trip, the Phils began the trip with a season-high five-game winning streak. That streak, and the pitching and offense that came with it, was what had the club feeling all right after an early lead went by the wayside.

“We were one big shutdown inning away from taking that game,” Cody Asche (photo above) said. “That’s baseball. I think if we just keep doing what we’re doing, we’re going to find ourselves in a good position.”

Asche, who grew up 25 minutes from Busch Stadium and was activated from the disabled list Friday, gave Kyle Kendrick an early cushion when he stepped to the plate in the second inning with the bases loaded.

The Phillies loaded the bases with a single, a hit batter and a walk before Asche came up with no outs. He drove the third pitch, a 98-mph fastball, to left-center to split the defenders and empty the bases.

“[He had] the big hit in the second inning to give us the three-run lead,” Phillies manager Ryne Sandberg said. “It was big to put us out in front.”

That lead would hold for two innings as Kendrick allowed just a leadoff single in the third through the first three. He retired Matt Holliday on seven pitches to begin the fourth, but the inning unwound from there.

A double, walk and single followed to load the bases for Jon Jay, who singled to right to plate the Cardinals’ first run. Jhonny Peralta singled to center to drive in two more and even the score.

“He just couldn’t get the ground ball to get him out of it,” Sandberg said. “The other innings he got some ground balls, it’s just the one they squared them up and put some hits together with the walk.”

“They got some hits and I wasn’t able to minimize it,” Kendrick added.

A safety squeeze play by Mark Ellis scored the go-ahead run for the Cardinals before Kendrick worked out of the inning. The Cards, in all, put five straight runners on — with four hits and a walk — to take a lead they would hold.

Kendrick surrendered one more run in the sixth before his day came to a close. He allowed five runs on eight hits and a walk in the six innings.

The offense, meanwhile, couldn’t muster much following the three-run hit in the second. After four straight Phillies reached to put a three-spot on the board in that inning, they scattered five baserunners in the final seven innings, never more than one in any single inning.

The Phillies averaged six runs per game in the first five games of the series en route to the five straight wins. In losing the final two games, the Phils combined for four runs on 11 hits, only two of which were for extra bases.

That sent the Phillies backward. After moving within 3 1/2 games of first place in the National League East on Friday night, the Phils return five games back of the Nationals on Monday.

The Phillies, though, will still return home having moved five games closer to .500 in the last 13 games while gaining two games in what has shown to be a winnable division.

“We put together some pitching and some hitting and played defense,” Sandberg said. “We put a lot of parts of the game together to have a road trip like we had, but it didn’t quite end the way we wanted it to.”