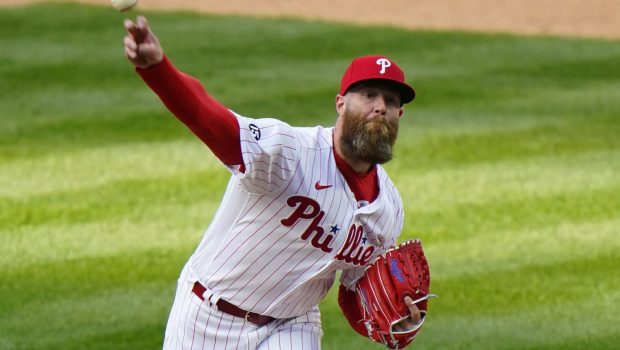 The Phillies may soon have the bullpen services of Archie Bradley, who has been out since April 11 with an injury.

MLB.com is reporting that Bradley may rejoin the Phillies following their nine-game road trip that begins tonight in Atlanta.

The right-handed reliever, sidelined since April 11 with a strained left oblique, will work with Triple-A Lehigh Valley in Allentown, throwing some bullpen sessions next week and then potentially making a couple rehab appearances before returning for the series against the Marlins beginning on May 18.

He very briefly threw off a mound earlier this week, though that was just to “test some things.”

“I’m feeling a lot better. I’ve never really had an oblique thing, so I’ve just kind of been doing what I’ve been told to do,” Bradley said yesterday.

“It’s a little different this year with the rules, as far as being able to travel and being involved, so I’ve just kind of been hiding inside and doing my rehab, and trying to get back as quickly as I can.”

Signed to a one-year, $6 million deal on Jan. 18, Bradley landed on the injured list after just four appearances. He’s still unclear exactly when he sustained the injury, saying it’s not something that happened on any one particular pitch.