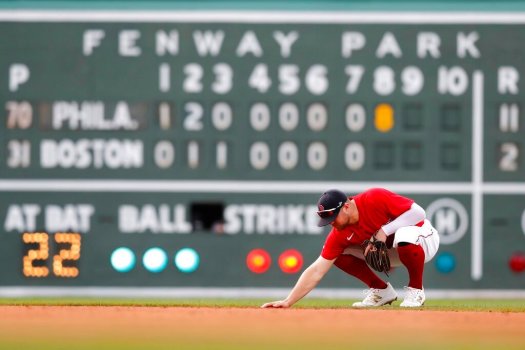 Fenway’s Green Monster was no match for the Phils Red Machine!

Segura opened the game with a drive over the Green Monster, and Bohm made it 3-0 with a two-run shot against Martín Pérez (7-5) in the second. The Phillies then broke it open with eight runs in the eighth, earning their fourth win six games.

“We have everyone back, which is nice, and we had contributions from everyone up and down the lineup,” Phillies manager Joe Girardi said. “Two guys can’t carry a team. When you score runs, it’s nice.”

Segura’s 10th career leadoff homer left the ballpark. Bohm’s sixth homer of the season also went over the Monster, a drive that bounced off a billboard near the left-field foul pole and led to loud cheers of “Let’s Go Phillies!” from the right-field corner.

The Phillies can go into the break at .500 with a victory today.

“I can tell you what: It can feel a lot better than being two games below,” Hoskins said.

Ronald Torreyes had three hits for the Phils, including a run-scoring single in the eighth.

“To me what’s most impressive is to hold them to two runs,” Girardi said. “That’s not an offense that usually doesn’t score runs.”

“We haven’t seen that in a while, right?’” Red Sox manager Alex Cora said of the eighth. “We had the right guy on the mound. Hard to stop it right there, one bad inning.”

Taylor gave up four runs and recorded just one out.

“I wasn’t locating today. I was all around the zone,” he said. “I’ve got to go back and watch video and figure it out.”

Bogaerts homered into the Monster seats in the second.