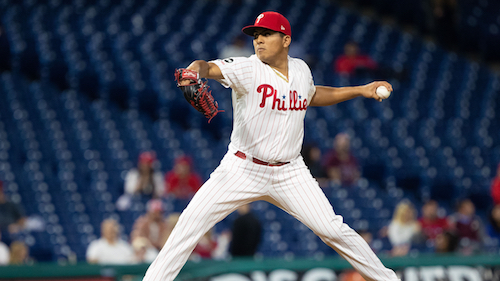 The battle to be the Phils fifth starter after Aaron Nola, Zack Wheeler, Jake Arrieta and Zach Eflin is heating up.

Pivetta and Velasquez were thought to be the likeliest No. 5’s, but Suárez has outpitched both in spring training. He has allowed one unearned run, five hits and one walk in five innings, with four strikeouts. He faces a good test on today, when the Phillies host the Red Sox.

Pivetta has allowed seven runs, 10 hits and four walks in 7 2/3 innings, with 10 strikeouts. A couple of defensive miscues cost him some runs on Wednesday against the Yankees.

Velasquez has allowed one run, five hits and two walks in five innings, with three strikeouts.

Phillies manager Joe Girardi said he would like somebody to claim the No. 5 job sooner rather than later, but that the competition will continue as long as nobody has separated himself. To this point, nobody has.