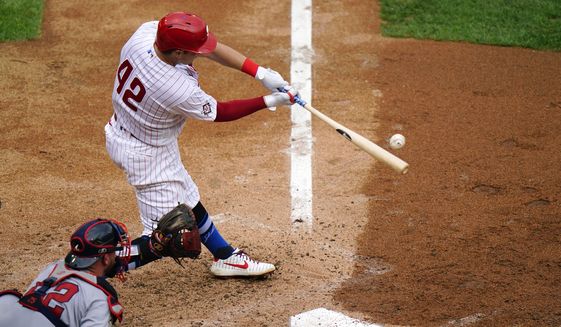 PHILS PULL WITHIN 2 GAMES OF 1ST ON HITTING BY HOSKINS!

He had three hits, including a three-run homer, and Zach Eflin pitched seven strong innings to lead the Phillies to their fifth straight victory, 4-1 over the Atlanta Braves.

Bryce Harper doubled and drove in a run for the Phillies, who pulled within two games of Atlanta for first place in the NL East. They last won five in row in August 2018.

Eflin (2-1) allowed one run on four hits with eight strikeouts and no walks. He likely would’ve come out for the eighth, but the game was delayed for 37 minutes due to rain with the Phillies batting in the seventh.

Johan Camargo homered for the Braves, and Freddie Freeman extended his hitting streak to 12 consecutive games with a ninth-inning, opposite-field single that beat the shift.

Hoskins gave the Phillies a 4-0 lead with a three-run drive in the fifth, ending the day for Josh Tomlin (1-2). Hoskins nearly homered in the third, but he settled for a double when his drive to right-center hit the top of the wall and bounced back into play.

Philadelphia got on the board in the first inning when Andrew McCutchen scored on Harper’s sacrifice fly.

Brandon Workman pitched a scoreless ninth for his seventh save in eight tries this season.

Camargo snapped an 0-for-18 skid with a solo homer to the second deck in right with one out in the sixth.

Austin Riley just missed a homer in the fifth for Atlanta when his drive to left hooked just foul. Riley ended up striking out. Riley’s foul was one of the few hard-hit balls hit off Eflin,

Tomlin gave up four runs — three earned — on five hits with two walks and a strikeout in 4 ⅓ innings.

Center fielder Ronald Acuna Jr. robbed Harper of at least a double with a stellar diving catch for the final out of the seventh.