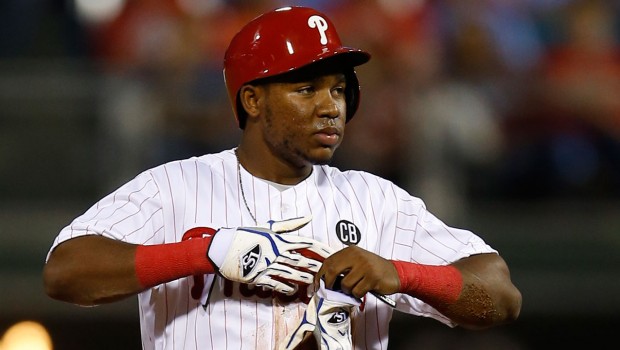 PHILS’ PROSPECT MAIKEL FRANCO TEARING IT UP IN WINTER BALL

The Phillies’ off-season has been a non-event — with only Jimmy Rollins and Marlon Byrd being traded in the team’s effort to reconstruct a winner — it is nice to know that the future has some hope.

Third baseman Maikel Franco, the Phillies’ No. 3 prospect, has been one of the hottest hitters during the playoffs in the Dominican Republic.

Playing for Gigantes del Cibao, the Dominican native went 7-for-17 with two home runs in five games last week and extended his playoff hitting streak to eight games. Franco, ranked No. 54 on MLBPipeline.com’s Top 100 Prospects list, is hitting .348/.354/.587 in 12 playoff games and ranks third in the league in both OPS and batting average during the playoffs.

With a week left in the round-robin playoff stage, Gigantes is in first place and on the verge of clinching a spot in the best-of-nine championship series.