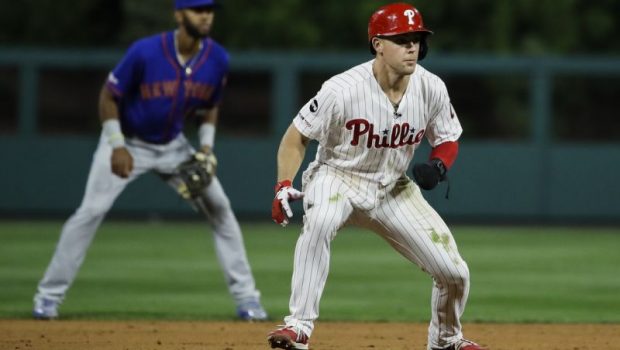 The Phillies have sent infielder Scott Kingery outright to Triple-A Lehigh Valley after he cleared waivers, making room on the active roster for Zack Wheeler, who’d been on paternity leave.

Outrighting Kingery rather than merely optioning him also opens a spot on the 40-man roster, which now sits at 39.

Kingery appeared in one game as a defensive replacement but didn’t get an at-bat after joining the Phils on Tuesday.

Kingery has appeared in only 52 MLB games since the start of the 2020 season, hitting .144/.204/.250 in 143 trips to the plate. That’s obviously not the kind of production the organization envisioned from the former top prospect, who at one point looked as if he’d cement himself as their long-term second baseman. Instead, Kingery’s strong offensive numbers from the early part of his minor league career have never really carried over at the big league level.

The Phils signed the University of Arizona product to a six-year, $24M guarantee shortly before he made his MLB debut. He’s under contract through 2023, making $6.25MM this season and $8.25MM next year. The Phils technically control him through 2026 via a trio of subsequent club options, but it’d take a massive turn of fortune over the next year and a half for the team to consider exercising any of those.

As a player with between three and five years of MLB service time, Kingery technically has the right to refuse an outright assignment in favor of free agency. Doing so would require forfeiting the remainder of the money on his deal, however, so he’ll certainly instead head back to Lehigh Valley. The 28-year-old is hitting .185/.297/.296 across 64 plate appearances with the IronPigs.