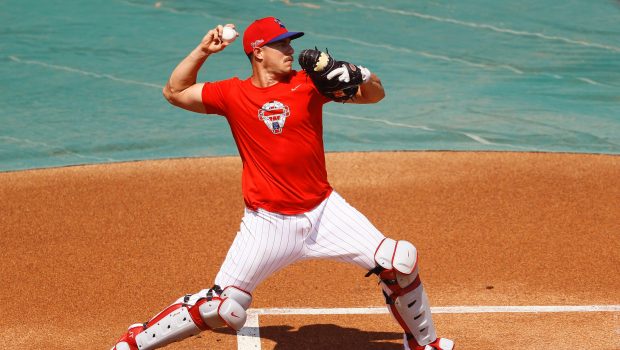 Phils manager Joe Girardi said yesterday that catcher JT Realmuto, who has been sidelined with a broken thumb, was cleared enough by the docs and he made 40 throws up to 90 feet. He also hit balls off a tee.

“He reported everything was good, no issues,” Girardi said. “We’ll slowly progress.”

Realmuto is on record as saying he believes he’ll be ready for opening day.

“It makes me feel better,” he said. “Had they said, ‘No, you’re not ready to start any baseball activities,’ then I would have gotten concerned. But it’s a good sign that he’s going in the right direction.”

Realmuto spent two weeks in a cast and the last week in a splint. He will still wear the splint for protection when he’s not doing baseball activities.

The Phillies still have 17 games remaining in Florida. Even if Realmuto takes a week to ramp up the intensity of his workouts, he’ll have plenty of time to get into some games or get at-bats in a controlled setting before camp breaks. The team could also monitor his workload over the first week or so of the season, giving backup Andrew Knapp some time.