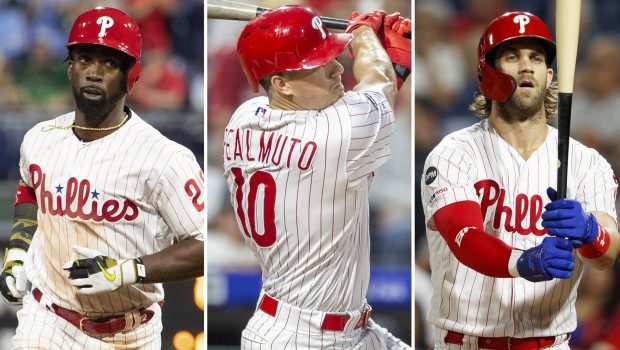 PHILS MAY NOT OPEN SEASON UNTIL JULY — IF THEN!

Nineteen ninety-four was an especially painful one in Philly.

The rag-tag bunch led by Dutch Daulton and John Kruk and Lenny Dykstra had won the 1993 NL pennant, losing on Joe Carter’s walk-off homer in game 6 of the World Series.

But a strike ended the ’94 season on August 11, with most teams playing between 112 and 117 games, making it the shortest season in history.

If anything, a shortened 81-game season appears to now be the most likely scenario for MLB. And, if COVID-19 lasts much longer, sports leagues could decide to cancel their seasons altogether, including the NBA and NHL forgoing postseason play.

NBC Sports Philly’s Jim Salisbury says that even games being played in empty stadiums is not feasible:

“They need personnel in the ballpark just to get the ballpark open,” he says. “These clubhouses are big complexes, multi-room complexes. You’re gonna have an expanded roster of like 30 players, then you’ll have guys on the IL, 10-plus man coaching staffs and video staffs and analytics staffs and athletic training staffs and there’s even the guys in there nightly who do the drug testing.”

Even when MLB and the MLBPA decides it is safe for teams to start gathering again, it is expected that at least a couple weeks is necessary for players to have another “spring training” to get ready for the season.

As much as Phillies fans were looking forward to the new-look team in regular season action, with Zack Wheeler, Didi Gregorius, Joe Girardi, among others, it appears more and more likely that we will now have to wait until at least July, if not longer, instead of the previously scheduled March 26 Opening Day.