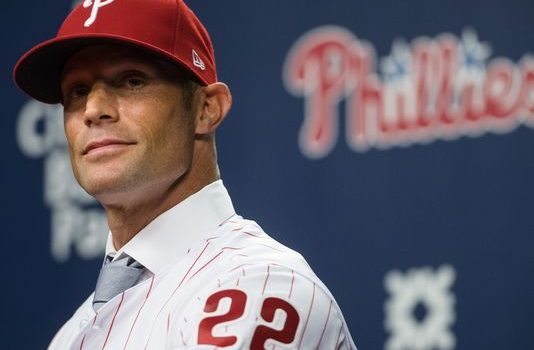 PHILS MANAGER GABE KAPLER’S NEW RULES: NOT SO MUCH!

If you’re wondering about the Phillies’ new manager, Gabe Kapler, who is decidedly out of the box, check out what the Boston Globe’s Nick Cafardo observed during the winter meetings:

New Phillies manager Gabe Kapler won’t be holding his players to too many rules.

“So by way of example, if you don’t have a rule about facial hair, and a man comes to the ballpark and his facial hair is down to his belly button, we might just say, ‘Hey, this is how this looks to your teammates. There’s no rule against not having a beard down to your belly button, but I just want to hold up an accurate mirror for you.’ Society passes judgment, whether we like it or not. So it’s almost like every decision you make in a Major League Baseball clubhouse has repercussions.

“So one of the ways that you sort of police it is by challenging. And when people aren’t living up to expectations, it’s sharing that there’s no rule against what you just did; however, there is a consequence for the action, and here’s what it is. It’s not always the same. It’s not always that you pull a guy out of the game. It might be that he might lose his teammate in the locker next to him. His teammate might have less confidence in him because of that decision.”

Kapler cut his teeth managing the Red Sox’ Single A Greenville Drive in 2007, when he worked with Josh Reddick, Lars Anderson, Daniel Bard, and Felix Doubront.

He was the Dodgers’ farm director when hired by the Phillies.

“It’s interesting with the Dodgers in player development, where I was coming from, we didn’t have any rules, and what we found is very rarely did players break the traditional rules,” Kapler said. “You’d talk to them. A guy didn’t show up on time, we had that conversation. Everybody knew that it wasn’t acceptable. You actually don’t have to post a list of rules on the wall for there to be a philosophical agreement that we have expectations.”

Kapler said he’s had conversations with Charlie Manuel, Joe Torre, and Pat Gillick and has a better understanding of what’s ahead for him and how to get the most out of his players.

He says he will be open-minded and treat players like adults. He has been a huge advocate for nutrition playing a big role in player performance. Kapler will definitely be the most fit manager in baseball.

“I would say that the philosophy and the strategy is educate, educate, educate,” Kapler said. “Present our players with the best possible options, the most nutrient-dense options, and then say, here are how these nutrients work in your body and how they have a chance to make you a more effective baseball player. Now go choose. You’re grown-ups.