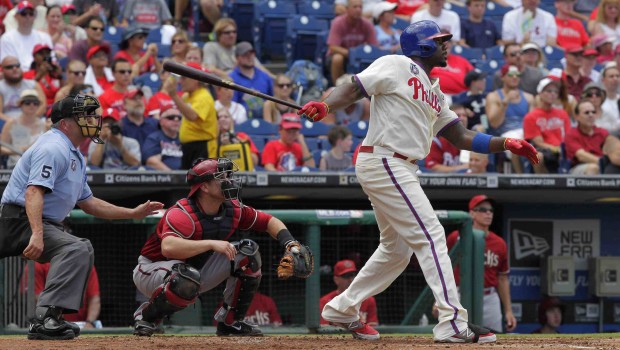 You can’t say that Ryan Howard didn’t rise to the challenge offered up by Phils manager Ryne Sanburg.

When Sandberg said he planned to play Darin Ruf more often at first base, because “I know what Ryan Howard can do. I think it’s also important to see what other guys can do.”

The comment struck a chord because Howard is the highest-paid position player in baseball this year in the third season of a five-year, $125 million contract. He is owed $60 million after this season, but Sandberg said the first baseman’s salary would not be a consideration when he makes future lineups.

“When the game starts, it’s about winning the game and being productive and chipping in and doing the part and doing something to help win a game,” Sandberg said. “If that means playing somebody else there and there’s production right away, that’s trying to win a baseball game.”

Sandberg benched Howard on Thursday against Giants right-hander Tim Hudson, whom Howard has faced more than any other pitcher in his career with a tremendous amount of success against him. Sandberg said that morning that “in all likelihood, at least after today … I’d be considering a platoon system at first base.”

It did not sit well with Howard, who had a couple meetings with Sandberg about it.

“Talk to him,” Howard said after Thursday’s game. “Talk to the manager.”

Howard sat a third consecutive game Friday, when the Phillies turned the narrative. They called the benching nothing more than a mental break only meant to help Howard relax.

Howard went 2-for-5 on Saturday, but heard boos whenever he made an out.

But he heard plenty of cheers Sunday. He crushed a first-pitch fastball from D-backs left-handerVidal Nuno to left-center field for his first homer at Citizens Bank Park since June 1. It gave the Phillies a 2-0 lead and the Phils held on for a 4-2 victory..

The D-backs scored runs against Phillies right-hander Roberto Hernandez in the second and sixth inning to tie the game, but the Phillies took the lead in the bottom of the sixth. Howard fell behind 0-2, but worked a two-out walk against Nuno before Marlon Byrd lofted a towering popup into shallow right field. D-backs second baseman Didi Gregorius backpedaled as Howard slowed to a crawl as he approached third base.

But Gregorius dropped the ball and Howard suddenly took off for home. He was out by about 12 feet, but because D-backs catcher Miguel Montero did not offer Howard a proper lane to the plate, replay officials overturned the call and ruled Howard safe.