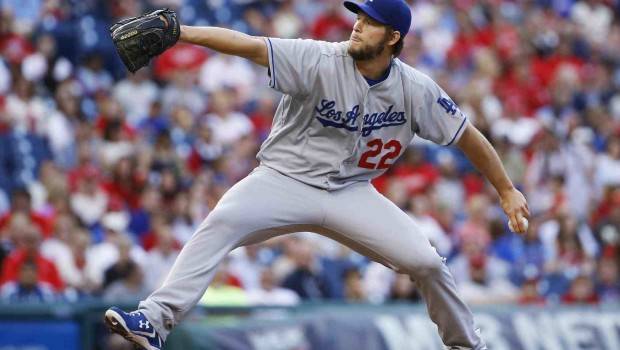 The kind of start Clayton Kershaw had in Arizona last weekend made it difficult to believe that he has won two Cy Young awards and was a runner-up once.

What he did Friday night against the Phillies, however, was more like it.

Kershaw bounced back from one of the worst starts of his career by throwing six scoreless innings. Even a fourth-inning rain delay couldn’t stop him from his appointed rounds, combining with four relievers on a three-hit shutout as the Dodgers beat the Phillies 2-0.

“Just pretty miserable those four days, five days in between starts,” said Kershaw, who was driven from his previous start after allowing seven runs in 1 2/3 Saturday. “It’s not a whole lot of fun sitting on that game for five days. So I’m glad this day came and I’m glad we got a win tonight. Now this is my last start instead of that one.”

Kershaw’s revulsion was evident in his words – and his deeds. The start in Arizona was the fifth time Kershaw has allowed at least seven runs in a start. In the starts immediately after those games, he has not allowed a run in 38 innings, allowing just 18 hits while striking out 37.

“He hides it pretty well,” Dodgers catcher A.J. Ellis said of whatever misery Kershaw was experiencing. “He’s always a good teammate, on the bench cheering for the other guys. But like I said after the Arizona game – I don’t know the last time I’ve seen him have two bad ones in a row. He’s always known how to rise to the occasion and kind of make amends for what he’s done.”

The weather might have been Kershaw’s biggest challenge Friday.

Dodgers manager Don Mattingly said Kershaw’s “stuff was really, really good early” and he rolled through the first three innings without allowing a hit. But a rainstorm forced the game to be suspended during the top of the fourth.

After a 43-minute delay, the game continued and Kershaw walked the first batter he faced, then gave up a double. He struck out the next three batters, getting Marlon Byrd, Ryan Howard and Darin Ruf to chase breaking pitches in the dirt for third strikes each time. Kershaw’s slider and curveball were the main culprits in the Arizona beating.

“He was able to keep his breaking stuff down,” Ellis said of the difference this start. “His slider was as good as I’ve seen it all year. That was the pitch we used to get out of that second-and-third jam. He struck out all three of those guys with sliders. In Arizona everything was up.”

Kershaw did almost the same thing in the sixth, allowing a leadoff double, walking the next batter and then retiring the next three.

“You’re just thinking, ‘Limit the damage,’” Kershaw said of the two jams. “You don’t think you’re going to get out of it scot-free.”

The Dodgers were lucky to get out of seventh-inning trouble as well.

Kershaw said he threw the equivalent of an inning in the batting cages during the rain delay, so he was done after six innings and 100 pitches. The Phillies loaded the bases in the seventh against Brandon League, who contributed to his troubles with a poor throw on a sacrifice bunt attempt.

That was the 40th error of the season for the Dodgers, but their defense stepped up to help J.P. Howell escape danger. Carl Crawford made a nice sliding catch on Dominic Brown’s drive to left field. Chone Figgins got a force out at home and Yasiel Puig ran down Carlos Ruiz’s fly ball.

“I’m thinking it’s down,” Howell said of Brown’s bid to drive in at least one run. “You always think the worst in those situations.

“Carl coming up with that catch was huge. I’ve seen him do it a million times in Tampa Bay. It was great to see it again there tonight.”

From there, Brian Wilson and Kenley Jansen retired the final six Phillies in order, striking out three – the kind of drama-free finish the Dodgers expected to see more often from the back end of their bullpen this season.

“A lot of good things happened tonight,” Mattingly said with a smile. “Kersh bounces back, pitches really good. We made a couple nice plays out in the outfield. The bullpen came in and did their job. So the world is kind of back in line.”