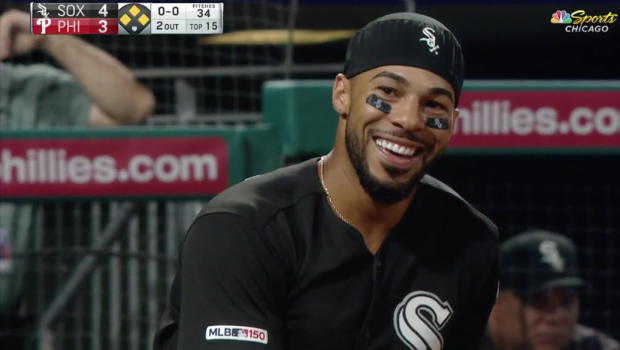 PHILS LOSE TO CHISOX IN 15 AND FALL BEHIND IN WILD CARD!

It took the Phillies 15 innings to blow a chance to stay tied for the wild card playoff spot.

Jose Abreu hit an RBI single off outfielder Roman Quinn in the 15th inning and the Chicago White Sox beat the Phillies 4-3.

Vince Velasquez, a starting pitcher playing left field, threw out the potential go-ahead run in the 14th with Quinn (0-1) on the mound. He nearly did it again in the 15th but Leury Garcia barely beat the throw. Velasquez then made a diving catch to end the inning.

“I was ready,” Velasquez said. “I love playing this game. I’ll throw left-handed if I have to.”

The right-handed Velasquez once played a season in high school as a left-handed outfielder because of bone spurs in his pitching elbow.

The Phillies fell one game behind the Cubs and Nationals in the NL Wild-card standings.

Things got weird in the 14th when Quinn went to the mound for his third career appearance and second this season. He allowed nine runs in three innings in his previous two outings.

Abreu walked to start the inning and went to second after third baseman Maikel Franco caught Eloy Jimenez’s liner but threw wild to first base trying to double him up. James McCann followed with a single to left, but Velasquez charged it perfectly and fired a strike to the plate to retire Abreu.

Quinn then intentionally walked Ryan Goins to bring up pitcher Carson Fulmer for his first career at-bat. Fulmer ripped a grounder down the line but Franco made a diving, backhanded grab and threw to first in time to get him. Fulmer injured his leg hustling down the line and was replaced by Osich.

Quinn got the first two batters in the 15th before Garcia singled and Tim Anderson walked. Abreu followed with a single to left and Garcia just beat Velasquez’s throw from left.

“That young man out there did a nice job for them,” White Sox manager Rick Renteria said of Quinn.

Quinn was called out on strikes to end the game and wasn’t happy with the call.

Jason Vargas looked sharp in his first start since the Phillies acquired him from the Mets. The soft-tossing lefty allowed two runs and five hits, striking out five in 6 1/3 innings.

With Phillies closer Hector Neris serving a three-game suspension, the bullpen was short and couldn’t secure a 3-2 lead in the ninth.

Juan Nicasio gave up a double to Eloy Jimenez with one out. He struck out McCann, but lefty Jose Alvarez entered and allowed an infield single to Goins before pinch-hitter Matt Skole lined an RBI single to right to tie it at 3-3.

Quinn blasted his third homer into the upper deck in right field in the third to cut Chicago’s lead to 2-1. He reached on a bunt single with one out in the seventh off Aaron Bummer, stole second and advanced to third on Cesar Hernandez’s infield single. Jean Segura bounced an RBI single to right to give the Phillies a 3-2 lead and advanced to second on the throw.

Bummer escaped further trouble by striking out Bryce Harper and J.T. Realmuto after he intentionally walked Rhys Hoskins to load the bases. The Phillies had the bases loaded with only one out in the first, seventh and eighth but didn’t score a run.

Hoskins, Harper and Realmuto were 2-for-18 combined.

Anderson hit a double with two outs in the third and Abreu launched his 23rd homer out to left-center to give the White Sox a 2-0 lead.