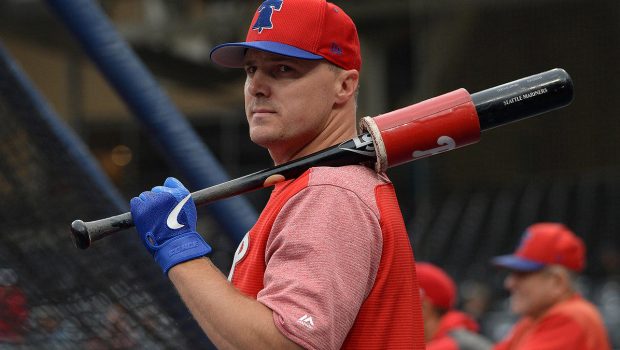 The Phillies got the win last night in Atlanta, but they lost their meal ticket.

Jay Bruce left the game in the fourth inning because of tightness in his left hamstring, and said that it had been bothering him for the past two or three days. But when he could not score from first base on Scott Kingery’s double in the third inning he knew he needed to say something. Bruce and the Phillies said it is a day-to-day situation.

“I got to the point where, I felt like if I did try, I thought I might actually injure it instead of it just being tight,” Bruce said. “Kind of take tomorrow and we’ll see, but I don’t anticipate it being longer than a day or two.”

He is batting .308 with five homers and 13 RBIs in 11 games with the Phillies, who acquired him on June 2 in a trade with the Mariners. He won National League Player of the Week honors last week.

The Phillies are lacking outfielders at the moment. Andrew McCutchen sustained a season-ending tear to the ACL in his left knee earlier this month. He had surgery this week. Odubel Herrera is on administrative leave as Major League Baseball investigates an alleged domestic violence incident that happened last month in Atlantic City, N.J. Roman Quinn is on the 10-day injured list. He could rejoin the team soon, although he got hit on the left shoulder with a pitch Friday night in Double-A Reading. Rookie Adam Haseley is on the IL with a strained left groin. Dylan Cozens could miss the remainder of the season following surgery on his left foot.