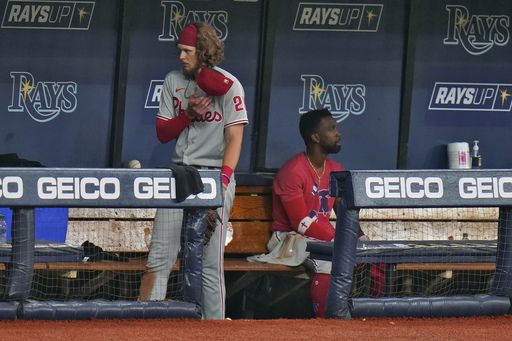 Andrew McCutchen had four hits for the Phils, who have lost six of seven.

But the Phillies avoided elimination from the playoff race when San Francisco lost to San Diego 6-2 later.

Heading into the final day of the regular season, the Phillies need a win over the Rays and losses by the Giants and Brewers to grab the final NL wild card.

McCutchen sat alone in the dugout for an extended period after the loss.

”It’s frustrating because you see the team that you have around you and you know we should be there, we should easily be there,” McCutchen said. ”To be on the outside looking in right now, it can be frustrating at times.”

”It felt great to see some guys rattle off some hits and some tough at-bats up there off a very good arm,” Lowe said.

Wheeler gave up four runs and seven hits over seven-plus innings, and had his streak of starting the season with 10 starts of at least 5 2/3 innings and three or fewer runs end. Only Curt Schilling, who began the 1998 season with 11 straight, had a longer run for the Phillies since 1900.

Bryce Harper had a run-scoring single in the seventh that got the Phillies within 4-3.

McCutchen put the Phillies up 2-1 on a solo shot during the fifth off reliever Pete Fairbanks (6-3).

Aaron Slegers went the final three innings and earned his second save.

McCutchen appeared to have a leadoff triple in the third, but was sent back to second after a video review determined the ball got stuck under the center field fence. It eventually cost Philadelphia a run when McCutchen was thrown out at the plate by center field Kevin Kiermaier on a two-out single by J.T. Realmuto.

”What a play, my gosh,” Cash said of Kiermaier’s throw.

Rays opener John Curtiss allowed a run and three hits in two-thirds of an inning. He became the eighth pitcher since saves became an official stat in 1969 to record a save and then start the team’s next game.