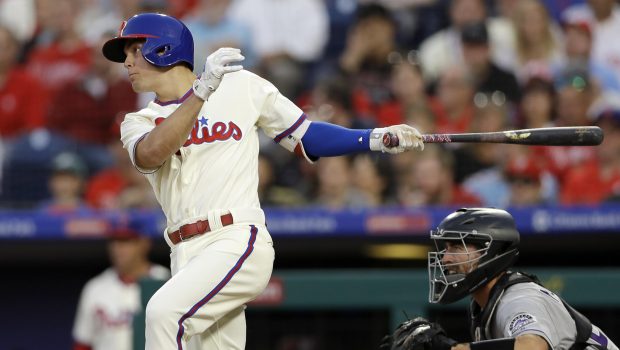 PHILS KINGERY’S HAMMY PASSES A TEST, SHOULD BE BACK NEXT WEEK!

The Phillies have been missing Scott Kingery’s bat (.406 average) and spark since he was injured a month ago.

And he had his first rehab game on Tuesday with Class A Lakewood.

Sidelined since April 20 with a strained right hamstring, Kingery legged out an infield single in the sixth and made multiple plays in the field while completing seven innings at shortstop.

Kingery was a bit tentative running down the line on a first-inning groundout and with the first ball that was hit to him at shortstop, but he said he was able to settle in as the game went on.

“That’s what I was hoping for, to at least have some plays that were a little bit challenging, so I could really test it out,” Kingery said. “It was good to get back out there into some game action. I’m just going to take it day by day and see how it feels, but yesterday went well.”

Kingery will next report to Double-A Reading, where he’s scheduled to play a full nine innings at second base tonight. He’s then expected to see time at both third base and center field with Reading on Friday.

“We want to get him exposed to the outfield and different positions around the infield so we can utilize him where it’s best for him and for the Phillies,” Kapler said.

The Phillies will reevaluate Kingery’s status following Friday’s game, though Kapler said this weekend might be a “stretch” for Kingery’s return.

As for how Kingery will fit into the lineup once he is activated, Kapler said that remains a moving target, especially with how well César Hernández has been playing at second base. Hernandez entered Wednesday with a .410/.478/.641 line and five extra-base hits in 12 games this month.

“The best way to describe it is he will be used and viewed in a similar fashion as he has been in the past with the Phillies: as an option to start at any position — third, short, second, center, left or right,” Kapler said of Kingery.

Kingery, of course, was playing well at the time of his injury, hitting .406 with six of his 13 hits going for extra bases.

“It was definitely frustrating when it first happened, just because I was kind of rolling along,” Kingery said. “But now I’m just focused on doing everything I need to do to get back up here and hopefully pick up where I left off.”