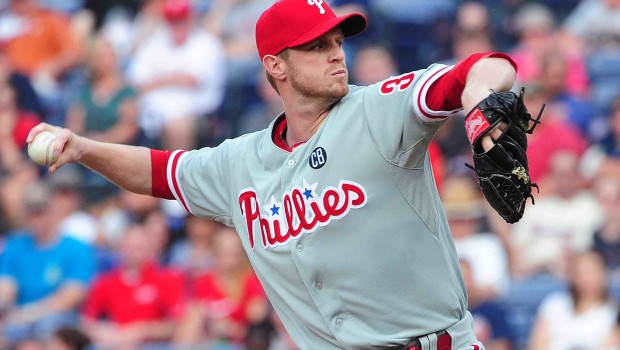 These are the times that try men’s souls.

Especially if the man in question is Phils GM Ruben Amaro Jr., who must have whiplash from all the good news/bad news of the team’s first 69 games.

The Phils have won six of their last eight games following Tuesday night’s 5-2 victory over the Braves at Turner Field. The Phillies are just 31-38, but they are only five games out of first place in the National League East.

“There’s something to that, moving up,” Phillies manager Ryne Sandberg said about the division standings. “It’s also about continuing to play good baseball and continuing to do what we’ve done the last two games.”

How should the Phillies front office look at it? Is it a team within striking distance of the division lead, or a team seven games under .500 that has not won four consecutive games in more than a year? They are both, so what do the Phillies do? Buy? Sell? Stand pat? Fortunately, the Phillies have 39 more games to play before the July 31 Trade Deadline, so there is plenty of time for the players to decide which way the front office should go.

And, according to MLB.com’s Todd Zolecki, the Phillies entered Tuesday with a plus-18 run differential since June 5, which is the second-best mark in baseball. The bullpen has been pitching remarkably well lately. It entered Tuesday with a 2-0 record and a 1.39 ERA since June 2, allowing only 19 hits, five earned runs, five walks and striking out 39 in 32 1/3 innings.

Kendrick allowed six hits, two runs, one walk and struck out six in seven innings Tuesday to pick up the win. He had allowed 15 runs in the first inning in his first 13 starts this season, including at least a run in seven of the last eight, but he halted that trend Tuesday. Kendrick struck out Jason Heyward and B.J. Upton on six pitches to start his night. Freddie Freeman doubled with two outs, but Justin Upton grounded out to end the inning.

“I changed up some things,” Kendrick said of his first-inning success. “I just warmed up a little earlier. I sat down for about 10-15 minutes and warmed up again. It could have been the weather. I always enjoy pitching here. I was pretty loose early.”

Kendrick held the 2-0 lead Ryan Howard handed him in the top of the first when he hit a two-run homer to left field against Braves right-hander Ervin Santana. It was Howard’s second homer in the series and 13th of the season.

“You’re just trying to find some real estate and a good pitch to hit, and I was fortunate to do that and the ball landed on the other side of the fence to give us a lead,” Howard said.

The Phillies are 8-5 when Howard homers this season.